A MAJOR threat to soil health and pasture production, soil acidity is increasing in its extent and severity under high-yielding, continuously cropped farming systems in southern Australia. 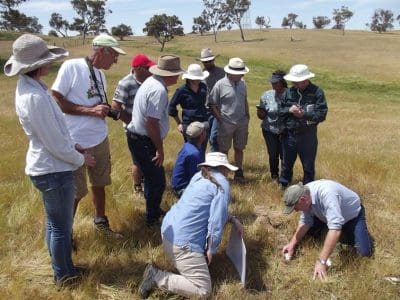 A field day at Tungkillo in SA, one of the locations where trials have been established to compare newer liming products with older products. (Photo: B Hughes)

Naturally acid soils are becoming more acidic and naturally neutral soils with alkaline subsoils are acidifying in the surface layers.

Soil acidification is a natural process, but the rate of acidification is increasing due to the higher rates of nitrogen (N) fertiliser being applied and an increase in cropping/hay intensity and yields.

In South Australia, a number of projects have been developed to explore issues and opportunities for improved treatment of soil acidity.

Mr Hughes said soil acidification had been associated with a decline in soil health, particularly soil biota (including worms and rhizobia), issues with leaching and tie-up of some soil nutrients, and the release of toxic compounds including aluminium which affect root growth.

“Identified barriers for growers to treating soil acidity include a general lack of awareness (particularly of subsurface acidification), lack of readily available information on liming products and options, concerns about the cost and economic returns from liming, and the possibility of inducing trace element deficiencies, greater snail numbers or an increase in certain weeds,” Mr Hughes said.

In SA, areas prone to soil acidity include the historical higher rainfall grazing areas covering much of the Mt Lofty Ranges, Lower South-East and Kangaroo Island, and emerging areas in the mid to high rainfall cropping areas including the Lower Eyre Peninsula, Mid North and Upper South-East.

An estimated 2.1 million hectares in SA are now considered prone to acidification of soil to below pH 5.5 in calcium chloride (Ca).

“Assuming current practices continue, it is estimated that acidity as defined by the potential pHCa <5.5 in the surface will develop over an additional two to three million hectares over the next 10 to 50 years,” Mr Hughes said.

As a generalisation, tolerant plants become affected by acidity around pHCa 4.5; sensitive plants around 4.8-5.0 and very sensitive around 5.0-5.5.

In an effort to determine the most effective approach to addressing soil acidification on different soil types, trials have been established in SA to compare newer liming products with older products.

Mr Hughes said both trials had shown responses to lime two years after application under no-till cropping. At both sites, higher quality limes seem to be having a quicker impact on yield and changes to pH.

Given that most lime products are only slightly soluble, there was no response in year one of the trials, with monitoring continuing for four to five years.

A new trial site funded through the GRDC is being established this year at Koppio where treatment options for sub-surface acidity are being compared.

Sub surface acidity refers to acidification of soil layers below the 0-10cm layer. This is an emerging problem and more difficult to treat than surface layers.

Meanwhile, tests have been developed to measure lime quality in terms of its effectiveness in counteracting soil acidity.

In addition, using a scanning electron microscope, CSIRO researchers have found that some lime products have much larger surface area and porosity and potential reactivity.

“These include those formed from coral which have a ‘honey comb’ particle structure that greatly increases the surface area and its effectiveness,” Mr Hughes said.

“Mount Gambier limestone is one such liming material. Other products such as lakebed products are dispersive and break into small particles when applied, which also increases their effectiveness.”

Precision pH mapping is another area of research, with the GRDC, PIRSA, DEWNR, Natural Resource Management Boards and the National Landcare Program, along with private providers/contractors, investing in the validation and demonstration of technologies for paddock-scale precision pH testing.

Through these technologies which produce accurate paddock scale pH maps, growers have the ability to apply targeted lime rates, varied according to pH zones.

“An auditing tool enables landholders to determine approximate acidification rates on their paddocks given soil conditions, crop rotations and yield and fertiliser inputs. Other tools evaluate the impact of acidification on production (cost of not liming) and compare costs of different liming products. These tools and technologies help deliver more cost-effective solutions, leading to greater adoption of strategies for managing acidic soils.”