IT HAS been a tough season across much of the northern sorghum growing region, but growers waiting for a rain break could potentially benefit from planning ahead to carefully match varietal selection to their environment.

The latest research has found crop yields can be boosted by up to 55 per cent by ensuring their hybrid selection and agronomic management is appropriately matched to the production environment. 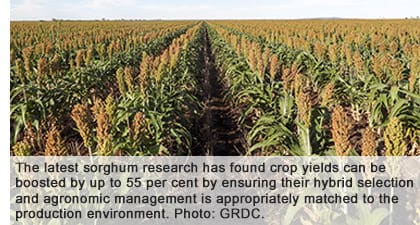 A four-year Grains Research and Development Corporation (GRDC) research investment into tactical sorghum agronomy in the northern grains region found that growers’ ability to match hybrid, row configuration and plant density to their local growing conditions and seasonal outlooks will be key to increasing productivity and minimising the risk of crop failure in the future.

Undertaken by the University of Queensland’s Queensland Alliance for Agriculture and Food Innovation (UQ-QAAFI) and New South Wales Department of Primary Industries (NSW DPI), the research assessed the performance of many commercially-available sorghum hybrids under a range of agronomic management practices, sites and seasons.

In low yield environments (< 5t/ha), plant populations ranging between 5 and 6 plants/m2, and hybrids with lower propensity to tiller showed the highest yields.

In high yield environments (> 5t/ha), hybrids with a high yield potential sown at more than 5 plants/m2 in solid configurations showed the highest yields.

Put simply, the choice of hybrid matters, both in the most productive environments as well as when stable yields are preferred to minimise risks.

For sites and seasons producing yields lower than 5t/ha, the highest yields were obtained with hybrids having low and low-moderate propensities to tiller, as rated by seed suppliers. This indicates a potential role for low tillering sorghum hybrids in drier sites and seasons where yields of less than 5t/ha are expected. 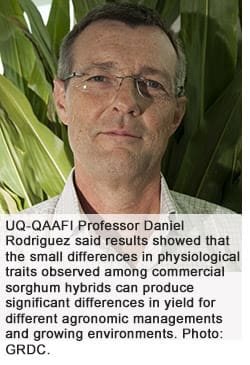 Optimising crop design within a low yielding environment was important, representing a profit gain of between $30 and $300/ha/year.

In sites and seasons yielding more than 5t/ha, higher yields were obtained with solid rows, increases in populations and hybrids showing the highest yield potential.

Hybrids showing high yield potential demonstrated a capacity to respond to changes in the productivity of the environment relative to the check hybrid MR Buster.

Some commercial hybrids were found to be well adapted to yield in the more favourable seasons and with higher fertiliser and irrigation inputs.

In these high yielding environments, configurations other than solid rows had yields of up to 12t/ha, which equated to a much higher profit of approximately $2000/ha.

In a simulation analysis using APSIM the project estimated that by adapting hybrid and management to site and expected seasonal conditions growers could derive an average benefit of approximately $143/ha/year while ensuring the chance of non-economical crops was close to zero.

“The increased reproductive efficiency of low tillering crop designs can drive sorghum yield gains across a broad range of yield environments,” he said.

This research also suggested that even though there are small differences between hybrids in terms of maturity, tillering and stay green, there are no commercial hybrids showing no-tillering or uniculm characteristics.

“In other words, most available commercial hybrids show broad adaptation characteristics,” he said.

“As our capacity to predict seasonal conditions improve with the combined use of APSIM and skilful seasonal climate forecasts, having access to hybrids showing higher specific adaptation to particular environments will be crucial for Australia’s 630,000 ha/year sorghum industry.”

Relationship between yield stability and yield

However, Professor Rodriguez said limited information was available on how these characteristics determine the yield potential and the capacity of the hybrids to perform across different environments, that is, their yield stability.

As part of the research, an index of yield stability was derived by comparing the yield of each hybrid to that of MR-Buster.

“Maturity type most likely influences yield stability via canopy size. In general terms, the smaller the canopy the higher its stability, though the lower its yield potential. We also showed that the most responsive hybrids achieved high yields from main stem and tiller panicles, and that were both responsive to changes in the potential productivity of the environment.”

Sowing sorghum into cool soils early in winter showed that:

“When sowing early in August, low temperatures will increase the number of days to flowering, though flowering will still take place earlier than in standard sowing times and the crops will have a lower chance of been affected by heat stresses at flowering,” Professor Rodriguez said.

“Importantly, simulation results indicated that early sowing would allow for a higher probability of double-cropping a winter crop after a short summer fallow. This shows benefits of the practice at both the crop and cropping system levels.”

According to Professor Rodriguez, this is the first time Australian sorghum producers have been presented with such comprehensive agronomic information on commercially available germplasm.

This has been further supported by the GRDC’s recent release of the first National Variety Trials (NVT) Hybrid Sorghum Performance Report to enhance variety decision making by northern growers.

The report draws on the first two years of sorghum NVT trial data from 21 locations in Central Queensland, Southern Queensland, Northern NSW, the Liverpool Plains and at Kununurra in Western Australia and is available at www.nvtonline.com.au/sorghum/.

“The results from our research show that identifying optimum combinations of hybrid and agronomic management for the right target yield and environment can make the difference between good yields and exceptional yields,” Professor Rodriguez said.

“Ready to use tools that can inform the decision include YieldProphet, CropArm, or other tools available at the ClimateKelpie website.”