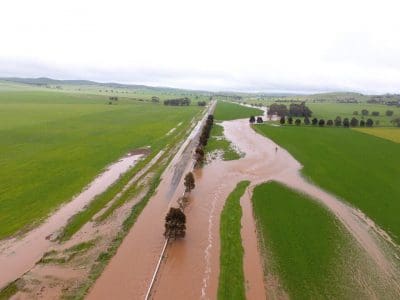 Crops under water near Spalding in the Clare Valley.

In general, the most impacted parts of the South Australian grain belt were the Eyre Peninsula and the lower, mid and upper north.

Eyre Peninsula farmer, Tristan Baldock, Buckleboo, said there had been significant hail damage to the crops in his region.

“There has been damage particularly in the Cleve and Kimba districts and the crops remaining are now at significant risk of disease,” Mr Baldock said.

However, he said crops in the Mallee and south east areas, particularly those sown later, would benefit from the rain in terms of increased yield although high protein in cereals will now be harder to achieve.

Further south around Bordertown, rain has caused many bean, canola and cereal crops to ‘go down’ in paddocks increasing the risk of disease and waterlogging.

For Mundulla grower, Michael Hunt, the 2016 harvest will now be slow and tedious. However, the increased yields, particularly in cereals, would largely compensate for the weather losses. 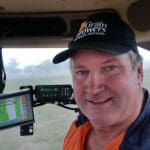 “Before the rain we had beans that were five feet high, now they’re five feet long,” Mr Hunt said.

“Fungicide sales are at record levels and growers who have shown loyalty to individual suppliers are being rewarded.”

GrainGrowers South Australian regional coordinator, David Evans, said as well as the impact on crops the storms resulted in widespread damage to farm infrastructure and road networks caused by flooding.

“North of Adelaide, many creeks and rivers struggled to cope with the huge volume of water that ran off already full soil profiles and broke their banks causing inundation and flooding of low lying areas including crops,” he said.

“It’s estimated $30 million of damage occurred in the market garden areas of Virginia and Two Wells.” 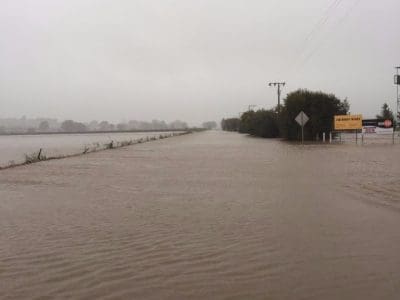 Flooding around Clare in the mid-north South Australian cropping belt.

On a positive note, the creeks are all running and the underground aquifer system is receiving a significant re-charge.

Mr Evans said the forecast for the next few days was encouraging with temperatures forecast to be in the mid-high 20s.

“The sunshine which will please those keen to get on with haymaking,” he said.

“Many areas recorded their highest September rainfall on record with Adelaide achieving the average rainfall for October in the first four days of the month.”