WITH submissions opening last week on 110,000 megalitres of water in the Flinders River catchment of North Queensland, landholders have been lining up to put in their bids.

The area, which is known for its large-scale cattle-breeding operations, has seen a surge in cropping interest in recent years.

Several growers have moved up from New South Wales for dryland ventures and some have been irrigating from different catchments in the area.

More than 180,000 megalitres has already been released in the catchment, which took a while to be used.

But the recent projects, including irrigation development at Etta Plains north of Julia Creek, have prompted significant interest in the next release of water. 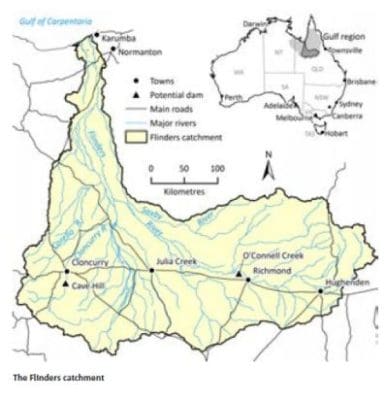 At least three dams have been proposed in the area and landholders have already publicly stated their interest in more water.

At Acton Land and Cattle Co’s Millungera Station, north of Julia Creek, Evan Acton said the recent activity had motivated the company to apply for the next round.

“We’ve been at Millungera for the past 36 years and haven’t done anything other than grow cattle because we can run a lot of cattle there – we have 35,000 head there,” Mr Acton said.

“Back in the early 2000s, when a lot of other landholders were getting water allocations from the Flinders, we didn’t worry about it because we thought ‘we’ll never be doing that’.”

Mr Acton said to develop irrigation at Millungera, the company would need to bring in others to help with operation.

“We know there are some people interested in share-farming with us, and we would need them to come in and do the operation,” he said.

“My great grandad came over from Ireland in the late 1850s and we have been in cattle game since – we haven’t done much farming.”

Moree-based agronomist Chris Radford has been working across the north-west on developing the cropping area.

He said the past two years had seen some mixed success, with irrigated crops standing out.

“Dryland cropping is quite volatile up there because the climate is variable; irrigation will be needed to underpin the industry,” Mr Radford said.

“If dryland was your only enterprise and you were relying on the rainfall up there to make money, it would be hard.”

Mr Radford said the past three years has seen some promising results in areas where rain has fallen.

“Some dryland cotton crops had about 90-100 millimetres of in-crop-rain and managed to do two bales to the hectare, which is pretty good.

“The top end of the sorghum yields were about 2.5 tonnes/ha with only about 55mm of in-crop rain.”

“Last year we didn’t have enough water to properly finish off the crops, so it will be interesting to see how we go this year with some more storages built.”

Along with other cotton gins being developed in the Northern Territory and Western Australia, a recent feasibility study has been completed for building one in North Queensland.

“We think this current season, there will be 55,000-60,000 bales produced across North Queensland, which is double last season,” Mr Murray said.

“That interest should continue with a bit more water being released. We need to keep in mind there is a lot of steps between securing the water and developing irrigation.” 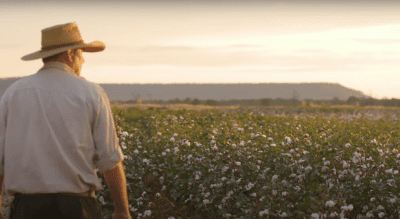 Mr Murray said if the area can continue to grow more than 60,000 bales of cotton annually, companies may be interested in building a gin there.

“Building a gin in the area is a commercial decision for one of the companies involved in that side of the industry, but if the area’s production can keep growing they should be interested.

“It will be important this current season is successful, I’d imagine more people will keep growing cotton in the area.

“With the cattle industry in the area, there would be a lot of benefits from having a cotton gin, because it would give producers access to products like cottonseed.”