Southern Queensland growers glad to see back of tough summer

RELENTLESS heat, patchy rain and not much of it, and Rutherglen bugs to boot: it’s been a testing summer for growers in southern Queensland.

Yields for sorghum crops now being harvested on the Darling Downs are coming in at around 3-5 tonnes per hectare (t/ha), well below the 5-8t/ha growers can expect from a normal season, a disappointing result which has been mirrored in dryland cotton and maize, as well as mungbean crops.

Hopes are now turning to substantial autumn rain to allow planting of winter crop, and plenty of moisture is needed to top up profiles depleted by thirsty summer crops.

“For anyone who had fallow, they’ll be looking for 50-80mm to plant, and I don’t think anyone would consider double-cropping on less than 125mm,” Landmark Dalby agronomist Adam Pittman said.

Pulse Australia industry development manager, Paul McIntosh, said a suite of winter crops — barley, canary, chickpeas, oats and wheat —could all have their 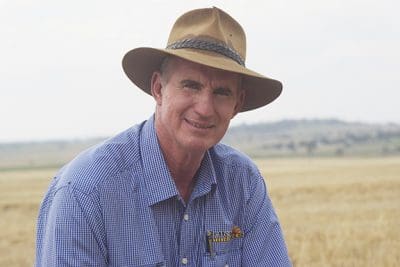 place in what could well be a challenging 2017 winter-cropping program.

“Particularly tap-rooted crops like chickpeas need subsoil moisture to do well, and I would think there is very little ground with any moisture in it at the moment,” Mr McIntosh said.

“It’s going to be a tough year of decision-making for growers.”

Mr McIntosh said prices for mungbeans were a bright spot.

“They are getting much more than $1000/t, and there are some isolated good crops around. Not everywhere in Queensland has been disastrous, but it’s been pretty tough in most places,” Mr McIntosh said.

Mr Pittman said better mungbean yields had come in at 1.25t/ha, but a lot had produced 0.5t/ha or less and would struggle to cover costs.

While storm rains have brought handy falls to some growers, others have had minimal in-crop rain through January and February, and summer crops which have fared best were generally sown into long fallow.

The yields of summer crops have all been affected by hot and dry conditions, and also by Rutherglen bugs, which have combined to reduce pod-set  in some mungbean crops, as well as lowering test weights in some sorghum crops.

Mr McIntosh said the December and January-sown mungbean crops in Queensland and border areas would be harvested from late March onward and rain had been desperately wanted over the past two weeks to ensure a reasonable crop.

“The spring crop planted from late August to September in the Central Queensland belt has done just okay for the tough variable conditions, but anything planted in late September and October has not been so good, and very patchy for consistent decent yields.”

“It is a dour consequence that our mungbeans are so sought-after by our overseas trading partners and we did not get enough rain to plant or grow the big acreage we intended.”

He warned, however, that the dry summer in Australia’s key chickpea areas might had extended the plant-back period for some residual herbicides used to control summer and autumn weeds.

“Growers and their advisors need to take that into consideration if they are going to plant some crops including chickpeas and wheat.”

Mr Pittman said if enough rain fell to allow a May-June planting, chickpeas were likely to be a favoured double-cropping option to follow sorghum.

Mr Pittman said a few oats crops had gone in on storm rain already, and oats planting would increase next month if enough rain fell.

“In a lot of areas, some blocks didn’t get wet enough to plant, and it’s those ones that were fallowed that will support a fair-sized winter crop if we get the rain,” Mr Pittman said.

Mr McIntosh said growers were likely to plant their own wheat or barley seed stored on farm at the first available mid-autumn rain, even though the price outlook for cereals remained mediocre.

“At least that will give them some cheap stubble cover or livestock feed. Some wheat and barley crops on the Downs last year were  also planted right into late July and early August, so that’s a pretty wide planting window.”