As winter crop sowing enters its final stages across Australia, Grain Central this week provides a State-by-State update on how the planting season has progressed to date. Today: Victoria and Tasmania

IN a year when winter crop plantings in most states are struggling under dry conditions, Victoria, by comparison, is travelling well with optimum sowing conditions in most areas getting crops off to a timely start. 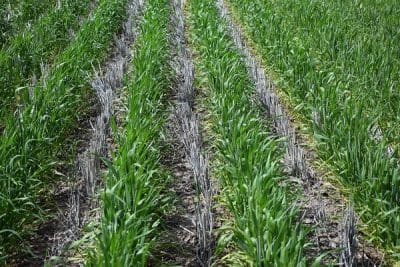 While conditions have turned dry in recent weeks, Victorian Farmers Federation grains group president, Ross Johns, said crops had generally established well and were “going along as good as possible at this stage”.

“I think there is enough moisture to carry through to the end of August, then it is really going to depend on what happens in the spring as to how the crops finish,” he said.

Mr Johns said most areas had had good moisture for sowing and, in some cases, too much moisture.

“In the Western District some crop didn’t go in because it was too wet, which is probably the only part of Australia where that occurred,” he said.

“There have been some issues with heavy stubble burden from last year and problems with a rise in mice numbers.”

Mr Johns said it was difficult to know how much crop went in overall and what the crop mix was, but indications were there was a swing away from cereals.

“Anecdotally, I think people have skewed more to canola and lentils, probably at the cost of wheat and barley in response to pricing last year,” he said.

Grain Producers Australia chairman, Andrew Weidemann, said while crops throughout the state were well established and progressing, growers were now looking for a “settling rain” to keep them on track.

“We have good soil moisture profiles at the moment but it is evident the current climate is on the drier side than we would like it,” he said.

“Everyone is concerned about the last month with little or no rain. There have been less than 10 millimetres recorded across the major cropping area of Victoria in the last month. We haven’t had the chance of rain here since May 25.

“They are talking about showers at the weekend, but at this stage less than 5mm, so not what we would call significant.

“The profile is damp but it is the outlook that is concerning us at the moment.”

Mr Weidemann said mice had been a problem this season and there were ongoing reports of the rodents causing damaging crops, in some cases forcing growers to write crops off.

“Some people are deciding whether to resow or not to resow. Obviously with the weather pattern where it is they are more likely not to resow,” he said.

In Tasmania where most of the winter wheat has been sown, northern grower, Michael Nichols, said large parts of the state had turned dry and growers were waiting for rain.