IMPROVING the uptake of Australia’s world-class research and development (R&D) will require greater consideration of farmers’ attitude to change, along with a range of other barriers to adoption, says a new report released today by Nuffield Scholar and grain grower Chris Reichstein. 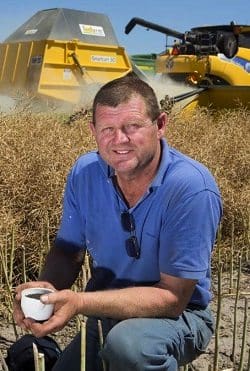 His research investigated how best to deliver scientific information to farmers to effect practice change and improve profitability and sustainability.

He also looked at international R&D models to bridge the gap between researchers and farmers to improve the performance of the agricultural sector.

Mr Reichstein said his study topic was inspired by a long history of adoption of innovation in the Esperance region across practices such as land clearing, high input production systems, the implementation of no-till cropping and precision agriculture.

“Esperance was settled by farmers in the 1960s, who were lured by the promise of cheaper land and opportunity. With that, there’s always been a strong undercurrent of risk-taking and progressive practice, which has led to early adoption in the area,” he said.

“Today, as growers in the 21st century, we’re facing a number of challenges such as climate and market variability, increased exposure to biosecurity threats and a general need to produce more, with less.

“I’ve always wanted to build understanding of what brings about change and how farmers learn to better their practices and, for me, the Nuffield Scholarship was the perfect opportunity to pursue this area of interest.”

The scholarship took Mr Reichstein around the world not only to examine different R&D models, but also to identify some of the key barriers to adoption.

“Australia is home to some of the world’s best R&D especially in agriculture, but has typically embraced the ‘top down’ model, which tends to be supply driven and directed by those off-farm like scientists and external organisations,” he said.

“There’s potential to explore other models like the ‘bottom up’ approach, which involves local farmers working collaboratively with public or private institutions, and lends itself toward being demand driven.

“One of the key findings of my report was that individual farmers are perhaps the greatest variable between enterprises when it comes to the financial and physical performance of a farm and that variations in behaviour can be based on past experiences right through to different personalities.

“So, having a more tailored and multi-pronged approach to packaging and delivering research could result in greater adoption on-farm and provide stronger return on investment.

“Furthermore, greater awareness into the impediments to adoption, be they cultural, economic, social, political or legislative, is absolutely critical and could bring a wealth of benefits to the agricultural sector.”

Mr Reichstein notes in his report that extension is an inexact science and to be effective should take into account different adult learning styles with a greater emphasis on peer-to-peer exchange.

“At its core, agriculture is incredibly diverse especially when it comes to research,” he said.

“Learning about the latest in R&D shouldn’t be a one-size fits all approach. It needs to be delivered to growers in a multitude of ways including face-to-face, written and online education.

“There’s a growing trend to facilitated peer learning via grower groups – a key characteristic of the ‘bottom up’ model – which play a vital role in bringing together farmers and researchers for mutual benefit.

“It encourages farmers to share ideas and knowledge at the grower level and, when combined with benchmarking and formal advice from farm consultants, can be a powerful driver of practice change.”