A REMARKABLE agronomic career that began with a research posting to the Victorian Department of Agriculture and culminated on the global stage as head of one of the world’s most prominent crop research and development organisations has been recognised by the Australian Society of Agronomy. 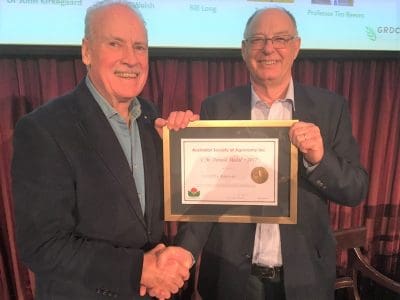 Professor Tim Reeves has been awarded the Colin Donald Medal for Agronomy, the most prestigious agronomy award in Australia, in recognition of his achievements as an eminent agronomist.

Originally from the United Kingdom, the University of Nottingham graduate was lured to Australia in 1967 to take up an agronomic posting with the Victorian DPI at the Rutherglen Research Institute where he pioneered no-till research in north-east Victoria.

His professional career was to go on to include holding the position of foundation professor of sustainable agricultural production at Adelaide University in South Australia (1992-95) and director general of the International Maize and Wheat Improvement Centre (CIMMYT) based in Mexico (1995-2002).

Professor Reeves said one of the lessons that came from his rise through the agronomic world was that “there is not one pathway to achieving what you want to do”.

“I was 25 years in the small community of Rutherglen. Admittedly I was promoted and had a few different roles there, but I stayed mainly for family reasons,” he said.

“Traditionally people think that if you are aspiring for the top jobs you have to chase the promotions elsewhere. Yes, that is one pathway, but there are others. I had a different one.

“I went from Rutherglen to the University of Adelaide as foundation professor of sustainable agricultural production heading the department of agronomy and farming systems.

“I was in that job about three years and was approached to put my hat in the ring for the job of director-general at CIMMYT in Mexico. I was the first Australian appointed to that position and the first non-US citizen to be appointed to the job.”

“One of the things about Australians is we understand climate risk, and economic risk because we don’t have subsidies, and that really helps you in the international arena, especially working in some of the tougher areas in developing countries,” he said.

“There are a lot of spill-over benefits that come to Australia from the work that CIMMYT does, particularly with wheat germ plasm.

“It is more than that. It is the collaboration of scientists, the involvement of Australian scientists in the global wheat initiative and being involved with the genetic improvement programs that CIMMYT provides.”

Delivering the Donald Oration at the Agronomy Australia conference in Ballarat, Victoria, Professor Reeves said in his 50 years pursing agricultural sustainability he learnt some key lessons that were still relevant for today’s young agronomists:

“It is the role of agronomists to try to pull those things together. You need good people who bring their own expertise to the group.

“I have been lucky to have that. First of all it was fortuitous but later in life it was through really targeted recruitment and making sure we got the right people in there.”

“I think there is more of a reluctance to do that today and invest in potential. Nowadays someone has to satisfy all the selection criteria or they don’t get offered the job.

“A lot of my career was based on senior people making the judgement that if they appointed me to the position with support, I’d grow into it.

“It is even more important nowadays because it is notoriously hard to get good, senior people to move. Younger, ambitious people are more mobile, so I think if we are going to get the best people in agronomy jobs you have to be able to say “You aren’t quite there yet, but we have the confidence to invest in you and support you”.”

“When I started at the Rutherglen research station in 1967, most of the contact with farmers was the main field day of the year, that one day in October. But even by then, those crowds were dwindling.

“I had the opportunity, that mainly came in my case through sporting and community contacts, to work with other farmers. A lot of my team-mates and opponents at football were farmers. That meant you’d have no difficulty getting plot sites, but also getting buy-in to the research. That is really important.

“Nowadays you probably have to work harder at it. There are a lot of agronomists not necessarily living in the community they work with because people tend to want to live in the bigger towns.”

Professor Reeves said grower groups were a primary asset in Australia, right from the priority settings for research through to the adoption on the farm, but he said they needed more long term support.

“The GRDC has been extremely good at supporting groups, but occasionally you sense a fatigue,” he said.

“I was once in a small United Nations working group with Professor Jeffrey Sachs, a great US economist and global thought leader. We were talking about international development and overseas aid.

“I have the same argument about grower groups in Australia. They are not immediately going to become sustainable because they have had a few grants. They are such an important part of the fabric they need ongoing support.”

Other international roles have included memberships of the United Nations Millennium Project Task Force on Hunger and of the European Commission Expert Group for Evaluation of Framework and H2020 Projects. He has also been a Senior Expert with the Food and Agriculture Organisation of the United Nations (FAO) working on Save and Grow – sustainable intensification of smallholder agriculture – and he recently led a FAO consultation in Cuba, on the development and adoption of conservation agriculture.

He has served on a number of Boards, including the Grains Research and Development Corporation and two Cooperative Research Centres, chaired national and international scientific committees and evaluated and advised on numerous agricultural science programs. He was a previous president of the Australian Society of Agronomy.

Professor Reeves is currently Board chair of the Foundation for Arable Research Australia. He is an honorary professorial fellow at the University of Melbourne and is director and principal of Timothy G. Reeves and Associates Pty Ltd, specialising in national and international consulting in agricultural research.