Strategy to beat brome grass in the south

BROME grass is showing off its ability to dodge and weave to evade control, making it the most costly weed in the Mallee regions of South Australia and Victoria, and increasingly problematic in other cropping areas of southern Australia. 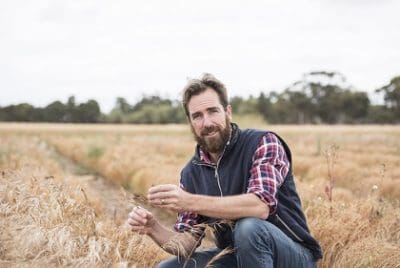 According to University of Adelaide weed ecology researcher Dr Sam Kleemann, the increased incidence of brome grass is associated with management practices that have inadvertently selected biotypes with greater seed dormancy.

According to University of Adelaide weed ecology researcher Dr Sam Kleemann, the increased incidence of brome grass is associated with management practices that have inadvertently selected biotypes with greater seed dormancy.

“We compared the dormancy behaviour of brome grass seed collected from crop paddocks and fencelines and found that the seed from the cropped paddocks had a greater dormancy, which allowed these biotypes to thrive in no-till, cereal intense farming systems,” Dr Kleemann said.

“The adoption of earlier sowing and dry sowing has also favoured this species. Brome grass has the potential to reduce wheat yields by up to 50 per cent if numbers get out of hand.”

This process of selection for biotypes that remain dormant longer and avoid pre-seeding controls such as a double-knock or cultivation, is slower but similar in effect to the evolution of herbicide resistance. Herbicide resistance levels in brome grass are currently low, however there are records in Australia of brome grass with resistance to Group A, B, C and M herbicides.

“The autumn break has traditionally initiated brome grass germinations, and this is when germination is most likely on fencelines and roadsides,” he said.

“The biotypes that have persisted in cropping areas are more likely to germinate in late autumn and through winter, and some even require a period of chilling to 5°C to break the dormancy period.”

Having evaded early control these late-germinating weeds go on to produce a large amount of seed and often lodged or shed their seed by crop harvest time, so they can also largely escape harvest weed seed control measures. The seed can remain viable for up to three years if it remains on the soil surface.

Although brome grass has proven to be successful in the no-till farming environment, dedicated research efforts have shown that brome numbers can be driven down quite rapidly using a double-break from cereals, more effective pre-emergent herbicide packages and sowing on-the-row rather than inter-row. 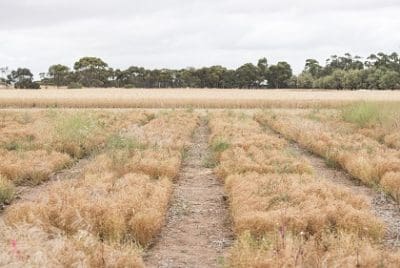 Growers who are noticing increased brome grass numbers can use a three-year rotational strategy known to effectively drive down the brome grass seed bank, starting with a pulse crop that is suited to crop-topping without yield penalty.

Trials on non-wetting sands in the Mallee have shown that sowing on the same row as the previous year improves crop establishment and the ability of the crop to compete with brome seed that is generally more abundant on the row than between the rows.

The planting operation can also help break the seed dormancy by burying some of the seed, putting the seedlings in contact with the full rate of pre-emergence herbicide.

“Growers will need to weigh up the extra cost in herbicide compared to the likely seedbank benefits and the variability in pre-emergence herbicide performance between seasons. This is why a diverse approach to weed management is essential.

“In years where crop competition is patchy, brome grass can exploit the opportunity and replenish the seed bank, putting increased pressure on pre-emergent herbicides the following season.”

Growers who are noticing increased brome grass numbers can use a three-year rotational strategy known to effectively drive down the brome grass seed bank:

Year 1 – a pulse crop to enable the use of effective pre-emergent herbicides and in-crop grass selective herbicides, followed with crop-topping to reduce brome seed set where there is no yield penalty expected.

Year 2 – canola or hay. Canola offers a similar suite of tactics to the Year 1 pulse crop, targeting brome grass germinations throughout the cropping season. Hay is a very effective option, reducing seed set by as much as 90pc, particularly if the hay is cut at the commencement of brome grass flowering. Regrowth after cutting hay must be controlled with grazing or knockdown herbicides, particularly in wet seasons.

Year 3 – Clearfield wheat allows the use of imidazolinone herbicides, the most effective chemistry available for brome grass control. Using this technology in a low weed situation (due to seed bank reduction in the previous two years) there is less pressure applied to this herbicide, which is known to be prone to rapid evolution of herbicide resistance in high weed density scenarios.