PERENNIAL wheat is showing potential as a way for mixed farmers to improve their sustainability and sequester carbon, with the New South Wales Department of Primary Industries (DPI) project into the benefits of the budding crop wrapping up this year.

“The problem with conventional crops is that every year we have to disturb the landscape, whether that is through herbicide or tillage; and that means we are eliminating plant cover on the landscapes for a reasonable period of the year,” Mr Hayes said.

“The farmer does it because presently the farmer doesn’t have another choice, and this is about providing a choice that maybe not all the cropping landscape has to be disturbed every single year.”

Alongside significantly reducing soil erosion, increasing plant cover also resulted in a rise in the overall amount of carbon sequestered.

Mr Hayes and other Cowra-based researchers have been investigating perennial crops since 2008, sourcing seeds from across the globe to test its viability in the Australian climate.

Mr Hayes said researchers worked with a small range of lines, some of which were wheat-perennial grass hybrids and others that were straight perennial grasses.

He said earlier projects commenced as proof-of-concept activities looking at whether perennial wheat was possible in Australia. 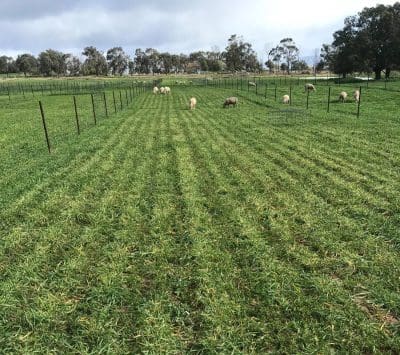 Livestock graze in a perennial wheat pasture as part of a recent trial. Photo: NSW DPI

“The program started out more or less by importing as much material as we could get hold of from what was available at the time,” Mr Hayes said.

“Some of it was bred specifically as a perennial crop, but some of the lines existed in conventional wheat-breeding programs.

“We demonstrated that some of these plants could survive for up to four years, but they weren’t robust enough for a farmer to grow them for years.”

The most recent project, set to finish this year, targeted perennial wheat’s prospects as a dual-purpose crop which would ideally produce suitable fodder and a harvestable grain for three seasons.

“What we determined was that in order for a perennial wheat to fly in Australia as a viable crop for a farmer, it is most likely going to be deployed as a dual-purpose crop.”

He said this work, sponsored by Meat and Livestock Australia, looked at lines suitable for livestock health and nutrition.

“Perennial wheat was shown to be a suitable forage for livestock, quite similar to conventional grazing wheat.

He said researchers found mineral supplements were still needed, as with traditional forage, but when perennials were grown alongside another crop, such as, legumes, the benefits to livestock diet and landscape biodiversity were evident. Run in tandem with the dual-purpose work, the NSW DPI researchers had the opportunity to undertake a one-year project investigating whether the grains harvested from perennials could be used in food manufacturing.

In partnership with AgriFutures and completed in 2021, the project worked with artisan bakers, brewers and breakfast food and snack-maker, Uncle Tobys, to investigate which, if any, lines had the qualities needed for human consumption.

Mr Hayes said the team grew enough grain from a dozen lines and gave them to the manufacturers giving them free rein to use the raw product as they saw fit.

“We were actually quite surprised at the positive response we got back from the artisans.

“Not all of the lines stacked up…but for a lot of the lines, the feedback was overwhelmingly positive.

“These artisans were so enthused about it that they have come back to us and asked whether they can have more grains to be able to put it on the market, and what that tells us is they are genuinely keen and that they want to develop it and see a market for it.

“They see an opportunity for something distinct, but it is also something that has a good story to it, and I think that is something they see as quite important.”

Small World Bakery’s Emily Salkeld said she is very excited about the prospects of perennial wheats for human consumption and like Mr Hayes was surprised by the success of the lines in baked goods.

Ms Salkeld said she worked mostly with hybrid varieties more than true perennials and found the grain size and quality as well as flavour and texture worked above her expectations.

She said making agricultural production sustainable and profitable for farmers in her area is also a keen concern which she believes perennial crops may have a hand in addressing.

“With perennial grains, it is adding another option for farmers, because we are friends with our local farmers and we have close connections with the people who grow our grains; we want to support more options for them,” Ms Salkeld said.

“It seems like climate change will mean that they will need to be more flexible with what they grow, so I think most farms will need more options and perennial grains is a terrific one.”

Ms Salkeld said her interest in these lines goes beyond the AgriFutures’ project as she is hoping to buy some of the perennial wheat grains when it becomes available.

The findings, detailed in the report Proceedings of the Perennial Artisan Grains Workshop, were overwhelmingly positive for one line, mountain rye, a perennial relative of cereal rye which had been developed as a forage in Australia 30 years ago.

This variety has promise in baking, brewing and in breakfast cereals as well as having a strong base as livestock forage.

“Our recent trials have shown that it has got reasonable yields and it has very good longevity compared to the hybrid perennial wheats and the artisans really liked it,” Mr Hayes.

“Even though this grain has had no development for grain-quality attributes, all the previous research was done as a forage, there was a lot of prospect for it in the food market.

“Having a plant like that gives us confidence that there is a pretty sound basis and quite an opportunity for development, whether that be development of the grain attributes or of the yield, or of adaptation to other environments in Australia.”

However, Mr Hayes said mountain rye was limited to selected higher-rainfall regions and would only succeed in districts such as Glen Innes and other tablelands locations outside traditional cropping regions.

He agreed with Mr Hayes that mixed operations would likely lead the pack if a crop was commercially available, with a dual-purpose variety providing financial returns for both sides of a farming system.

“The interest from a farming point of view is that if we could sow a perennial grain once and harvest it over the next three or four years, that certainly has some appeal,” Mr Bushell said.

“Instead of growing a mixed species cover crop, potentially if we can make a perennial grains system work, we would throw that in the mix and have a source of income from grain if the data suggests we are getting close to it.”

Mr Bushell said the gains from having longer, undisturbed soil coverage from a perennial crop would also appeal to growers looking to improve their operation’s sustainability and carbon sequestration.

However, he admits it is early days and the lack of long-term data on a particular variety and limited seed availability was holding back on-farm trials.

“It is very early days, and the data is looking a bit skinny at the moment but, if one day the data looks good from this perennial grain, that is something we may be able to introduce into that rotation, depending on seed costs and logistics.”

With the latest project about to end, researchers are evaluating their next steps to transforming key perennial wheat varieties into commercially available crops.

Mr Hayes said the immediate concern must be to increase seed availability for both interested farmers and research purposes.

“One of the things that has constrained our research since we started this was access to seed.

“We now have a bit of a supply for us, not a huge supply but it is certainly enough to maintain our research and it has been enough to expand our research footprint and go out to at least a few commercial farms and trial it in different environments.

“I don’t see a great uptake for trialing purposes in the near future just because of that constraint.

“I think our next step once we finish this particular project is we will have to sit with industry and think how we can do this and if there are growers out there that want to try it, we to work out how can we help facilitate that.”