FARMERS in the northern farming zone are taking a close look at the potential to use swathing techniques on mungbean crops at harvest instead of the more conventional approach of applying chemical desiccant and direct harvesting.

Pulse Australia northern region agronomist Paul McIntosh said swathing, where the crop is cut and left in windrows before being picked up later by a low-set harvester, could offer the potential for producers to get their crops off the paddocks earlier.

And, being free of desiccant herbicides, it might also lead to greater marketplace acceptance of mungbeans as it removes the chance of them exceeding maximum residue limits (MRLs), an issue that has emerged in increasingly-sensitive export markets. 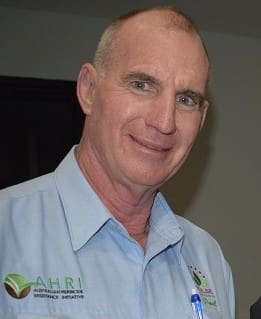 “The interest from farmers and agronomists has been quite staggering throughout New South Wales and Queensland. The advantages of swathing would be the potential for earliness getting the crop off the paddock and marketplace acceptance of having mungbeans without any desiccation herbicides on them or exceeding MRLs in the changing landscape in our export countries,” he said.

Mr McIntosh said mungbean growers had traditionally sprayed out the crop at 90 per cent maturity with a herbicide, such as glyphosate or diquat, to kill the plants and reduce the amount of material going through the header.

But he said growers often found that applying the desiccant at registered rates did a poor job, leaving many of the plants half green and alive.

Mr McIntosh said that had prompted him and a farmer friend on the Darling Downs to run a couple of mini, on-farm trials at the end of this season’s crop to get a better idea of how swathing performed, and whether it might be a viable alternative.

The smaller block was swathed at 90pc physiological maturity and was harvested four days later.

Mr McInstosh said they were surprised to find that the bean quality from the test block was as good as the balance of the conventionally-desiccated part of paddock and the crop yield was around 1.6 tonnes per hectare.

In the larger paddock, the crop, which was shorter and sparser, was swathed into a windrow and had to remain on the ground for 14 days due to two falls of rain: one of 12 millimetres and another a few days later of 18mm.

It was harvested with a Smale pick up reel on a conventional John Deere header and, despite the extended period on the ground, produced good quality, green, shiny mungbeans and a yield of just under 1t/ha. The swathed mungbean windrow lay on the ground for 14 days due to two falls of rain in the paddock trial, but still produced high quality grain.

Mr McIntosh said one of the things they were hoping to learn from the work was how early would it be possible to put a swathing operation into a windrow.

“Conventional desiccations are done at over 90pc maturity. Can we go any earlier with a swathing operation and have the plant still develop the seed to its full potential?” he said.

“If we can get that earlier than what we are doing now and it has no herbicide on it it will make things a whole lot easier.”

Mr McIntosh said it was early days yet, but if swathing was to prove viable, farmers could get away from using desiccant herbicides and not have to worry about their grain exceeding MRLs.

“The larger paddock had two lots of rain, an 18mm and a 12mm fall, and it was on the ground for two weeks. Even after that extended period on the ground there were very few pods left on the ground and the quality of the grain was as good as conventional.”

Mr McIntosh said the number of machinery runs for either technique was similar, with either a boomspray for desiccating a crop or a swather for putting it into a windrow, and both using a header to harvest the grain.

“There is the same number of passes, but swathing will be a lot slower. The swathing operation was about $15-$16/acre ($37.50-$40/hectare). Spraying with a boomspray would be close to the same, and if you have to spray twice the swathing would be in front,” he said.

“The harvesting operation is just with a header picking it up.

“The speed of doing these operations might be an issue. We are still learning about that.”

Potential for other crops

The promising results with swathing mungbeans have encouraged Mr McIntosh to look into whether the technique could be used on other crops that have traditionally been direct headed.

Last year, his farming friend had a crop of sorghum that was lodged and tangled.

He decided to get the swather out and put it into a windrow before harvesting it.

“The moisture was so high in the sorghum head he picked it up without a worry. It showed swathing of grain sorghum could be done,” Mr McIntosh said.

He also tried swathing sorghum trial plots at Gatton in the Lockyer Valley in November.

“The results show it is very practical and possible for the future, especially in terms of grain quality, minimum grain loss and speed of getting the crop off the paddock,” he said.