WITH frosts hammering crops in parts of Western Australia’s central, eastern and south eastern grainbelt in the past two months, growers are warned to remain on alert as the risk period has been brought forward by earlier plantings in 2016. 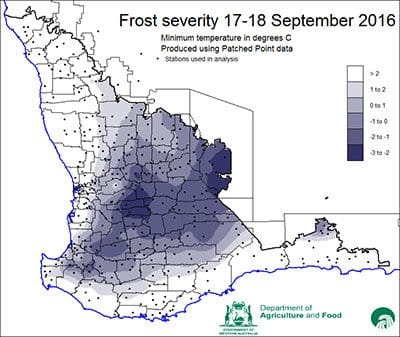 The Department of Agriculture and Food WA (DAFWA) is encouraging growers to continue to be on the lookout for symptoms of frost damage, but not to be alarmed about its impact.

It advises that frost symptoms might not be obvious for up to 10 days after a frost event and damage tends to be patchy, with variability in a paddock.

Early sown crops, low lying areas and light coloured soil types are typically most at risk in WA and these areas should be checked first.

It is best to be very confident about frost damage levels and consider all economic aspects before making decisions about damaged crops.

Cereals are the most sensitive of the winter crops to frost and yield losses from frost can occur from damage during and after flowering and at the early stages of booting.

Canola and pulses are at the highest risk of reduced yields from frost during the period from early flowering to late pod growth, but most yield losses occur after flowering and during early seed fill.

Frost damage in all crops can change with soil type, aspect and elevation, so it is advisable to check plants in different parts of an affected paddock.

GRDC NFI Management Program leader, Dr Ben Biddulph, based at DAFWA, said the first step in determining what to do after a crop had been frosted was to inspect and assess the damage.

For cereals, the recommendation is to collect random samples of heads across the paddock to estimate if any yield loss has occurred and to determine the extent of any damage.

If a severe frost is suspected, it is best to continue inspecting and monitoring crops for up to two weeks after the event.

For pulse and canola crops, it is recommended to peel open flowers and pods to see parts that may be affected.

Research and experience in WA has found that early identification of frost damage is essential if the optimum return is to be achieved from the crop.

Detailed frost identification guides for cereals, pulses and canola are available in the GRDC ‘Back Pocket’ series and its new Tips and Tactics publication ‘Managing Frost Risk’.

The DAFWA website has information about frost identification and evaluating options for damaged crops at this link, as does the GRDC western region Wheat GrowNotes, at this link.

Key symptoms of frost damage in cereal crops include:

Key symptoms in pulse and canola crops include:

What to do with frosted crops

If frost damage is identified, there are four main options for managing the crop to the end of the season:

Dr Biddulph advises that if damage has occurred outside critical periods in crop development, the best option may be to harvest the grain – as most cereals can produce new tillers to partially compensate for damaged plants. This is providing spring rainfall is adequate.

He said cutting crops for hay could be expensive and growers should have a clear path to market or a use for the hay on-farm before committing to this option. The economics of grazing, manuring and crop topping also needed to be analysed closely.

Frost is just one of the many complex constraints that growers need to manage.

Frost strategies can be adopted throughout the season but, at present, there are limited options available to economically salvage frosted crops.

Detailed in this publication are case studies of six WA growers who are successfully using tactics as part of an integrated frost risk management strategy throughout the growing season. It is available online via this link.

In some cases, frost is costing these growers average yield losses of up to 10-20 per cent per year across their total cropping programs in a 10-year period.

But the measures they are adopting illustrate what can be possible when a customised, individual approach is taken to making decisions and when an integrated plan is used to address frost issues pre-season, in-crop and post-frost event.

The unpredictable and sudden nature of frost in cropping systems in parts of WA means its impact can be very emotional.

Complex management decisions are required and, in some circumstances, this can drive the adoption of conservative practices by growers and result in missed opportunities.

Dr Biddulph said while it was useful to seek objective assessment of frost risk, it was important to avoid a one-size-fits-all approach to managing this risk. 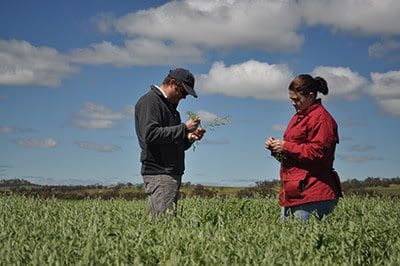 He said frost risk plans used by the case study growers tended to start with an assessment of their approach to business risk and close consideration of their property’s exposure to frost risk.

Several growers are identifying and compiling zones and/or maps that identify the range of frost susceptibility of paddocks for adoption of diverse or alternative agronomic practices or enterprises to spread production and financial risk.

For the future, the frost case study growers say they are keen for GRDC to continue funding genetics research into the development of more frost-tolerant wheat and barley germplasm and ranking current wheat and barley varieties for susceptibility to frost.

Through the NFI, frost susceptibility rankings have now been made available for most commercial wheat varieties used in WA to help growers compare varieties and time of sowing when planning frost risk management strategies. These can be found at http://www.nvtonline.com.au/frost/

The data is based on three years of national research into field-based frost damage, including at research sites near Merredin and Wickepin, and rankings can be accessed through the GRDC’s National Variety Trials website.

The RCSN ‘Managing frost risk’ booklet includes a comprehensive overview of the latest research being conducted through the GRDC’s NFI for managing frost risk pre-sowing, in-crop and after frost events.

WA growers are encouraged to report frost damage through the DAFWA PestFax Reporter App available on Apple App store, Google play or online at this link.