TEFF is gaining traction as a versatile dual-purpose crop which is ideally suited to irrigation country in the Murray Valley and surrounds. 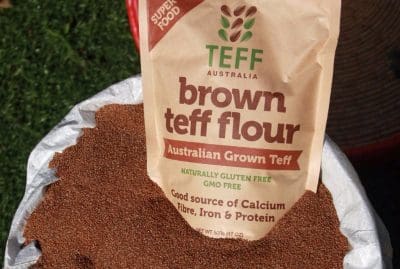 Native to Ethiopia and Eritrea, the summer grass produces a tiny and gluten-free seed which has traditionally been ground into flour to make the staple flatbread, injera.

High in iron, calcium and protein, teff and its products have grown in popularity in recent years, and can now be purchased at markets, supermarkets and health food stores, as well as from specialty menus throughout Australia.

Some Australian-grown teff seed has found its way into local domestic milling, but growers are finding teff’s greatest value lies in the equine hay market.

Wakool producer, Chris Doherty, has grown teff for some years, and said it fitted well into the family’s livestock and seed-production operation in the Murray Valley.

“We have sold it into markets for seed and for human consumption, but I feel the real place for it is the hay market, where people have gone mad for the low-sugar hay it produces.

“In another three years, I can see it being a staple crop in Australia.”

Teff’s star attribute for the horse industry is its high level of protein — around 18 per cent — and its low level of carbohydrates, which make it an ideal feed for horses and ponies with laminitis.

It has emerged in the horse feed market as an alternative to lucerne which, with its higher level of carbohydrates, can contribute to weight gain, the last thing an animal with an inflammation of the feet needs.

The Doherty family operates an Angus cattle and a Border Leicester sheep stud. Mr Doherty said teff was a valuable grazing crop for their stock.

“Teff and forage sorghum produce a similar amount of dry matter per hectare, but teff doesn’t have the health risks which sorghum can have for livestock when the plant is stressed,” he said.

“Once we’ve harvested it, we can let it grow and it fills the autumn feed gap. It’s pretty awesome stuff.”

Mr Doherty said teff required a considerable amount of water in its early stages, but once it was established, it could finish without irrigation.

“With teff, you aren’t as committed as you are with sorghum to water use once it’s established.”

Market for food and seed

Mr Doherty said marketing of the seed could also be tricky, as a stable domestic market did not yet exist.

Two companies, Teff Tribe and Shepparton-based Teff Australia, are trying to change that.

Teff Tribe is based in Sydney and partner, Sam Ellis, said the company had already developed a number of products, include a pancake and a brownie mix, which were selling well, and a teff porridge was due for release in coming weeks.

“We’re leveraging off the health benefits of teff to create a number of consumer-ready products. We aren’t pushing it directly into the injera market, but we do wholesale to several bakeries, food manufacturers and cafes,” he said.

“The demand of late from the larger general grocery provider is picking up fast, which is very exciting.”

“Imagination is the only limitation.

“Our ultimate goal is to work with Australian farmers, but it’s not possible at the moment given the nature of the market.”

Mr Ellis said even in the gluten-free market, teff was still largely unknown.

“We are trying to change that, but we need a security of supply and a price that we can afford to pay so we can process in Australia and sell it here and possibly overseas.”

The crop is currently being grown from southern Victoria to Queensland, but seems best suited to clay soils in the Murray irrigation areas.

It thrives in the heat of summer, and growers report it can grow several centimetres in a single 40-degree day.

Teff Australia director, Haileluel Gabre-Selasi, said Australian growers had been dabbling in teff for 15-20 years, and in that time, demand had spread from the expat Ethiopian community to wider Australia.

Teff Australia is marketing its products online, and also distributing through health food stores, as well as supplying some commercial bakeries.

Mr Gabre-Selasi said now was the time to provide some agronomic support to teff producers, and that Teff Australia was currently in the process of forming the Australian Teff Growers Association.

“We would like the industry to grow, so it’s important to get the proper information and support to growers about choosing the right varieties and suitable fertilisers which will help them get the best performance out of their crop.”

Growers said variability in seed yield was one reason why they were looking more at the hay and less at the human-consumption market.