The art of deploying adjuvants to combat herbicide resistance

THE role of adjuvants in the performance of herbicides is often either over-rated or under-estimated, according to Jubilee Consulting research agronomist, Andrew Somervaille. 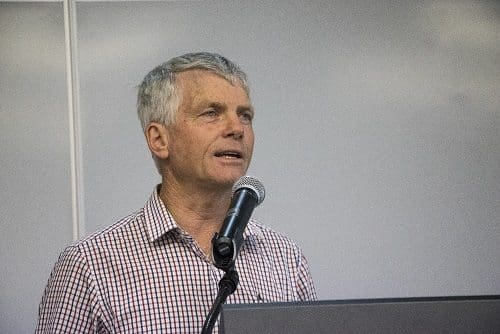 Jubilee Consulting research agronomist, Andrew Somervaille, suggests growers and advisers should not overlook or over-rate the use of adjuvants.

This may seem a contradiction, but the fact is that sometimes adding an adjuvant is beneficial and sometimes it is detrimental; and there is an art to knowing how to best deploy these additives.

When weeds are susceptible to the applied herbicides, the effectiveness of adjuvants generally goes un-noticed.

However, correctly applied adjuvants can reduce the impact of low level herbicide resistance by helping to maximise the amount of herbicide taken up by the plant.

“In the best case scenario, the correct use of an adjuvant can optimise performance of a single herbicide, or a herbicide mix,” Mr Somervaille said.

“This results in the most efficient control of the target weeds, minimises seed set and reduces weed numbers into the future. All research points to low weed numbers as the only sustainable way to manage herbicide resistance. 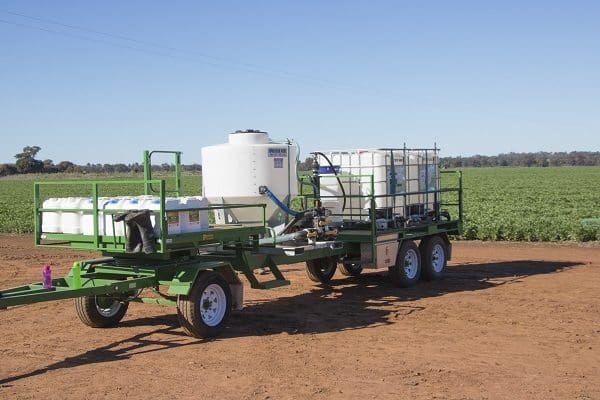 Adjuvants can play an incremental role in improved herbicide performance and assist with keeping weed numbers low and reducing the risk of sub-lethal resistance traits. However, their use does not over-ride the need for correct chemical use and application under the right conditions.

“In the worst case scenario, the incorrect use of an adjuvant can reduce herbicide performance, may compromise the physical compatibility of mixtures and can alter the function of tank mix components.

“This may result in a sub-lethal dose of herbicide being applied, which is known to amplify herbicide resistance if there are low levels of resistance present in the weed population.

“Once populations are highly resistant then the impact of adjuvants is reduced. This highlights the importance of being very deliberate and calculated when making recommendations or decisions about adjuvants.”

In one experiment Mr Somervaille conducted with two formulations of glyphosate, he measured the effect of the adjuvant used in each formulation, when in the presence of 2,4-D, to control awnless barnyard grass.

“We know there is antagonism between 2,4-D and glyphosate in a tank mix in some situations that results in a reduction in the level of control expected from glyphosate alone,” he said. 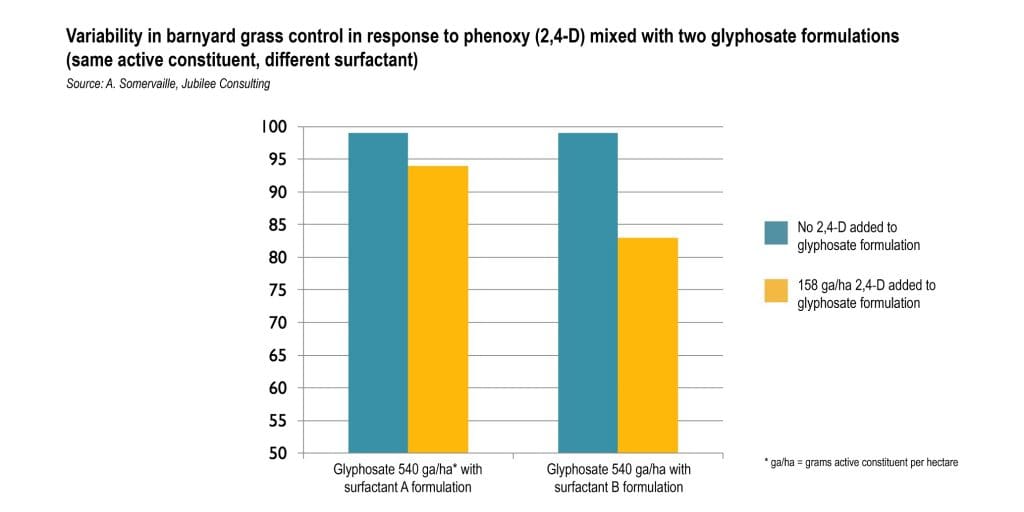 Mr Somervaille said that although some herbicide products were manufactured with an adjuvant included as part of the formulation, there might still be a benefit gained from adding another type of adjuvant prior to application, depending on the other products in the mix, the water quality or the target weed.

In another experiment, he investigated the effect of different adjuvants (LI 700 and Liase) on the efficacy of a RoundUp Power Max (glyphosate) and Amicide (2,4-D) mix.

The results clearly showed that while Liase improved the performance of the mix, LI 700 reduced performance to less than 80 per cent control of barnyard grass. 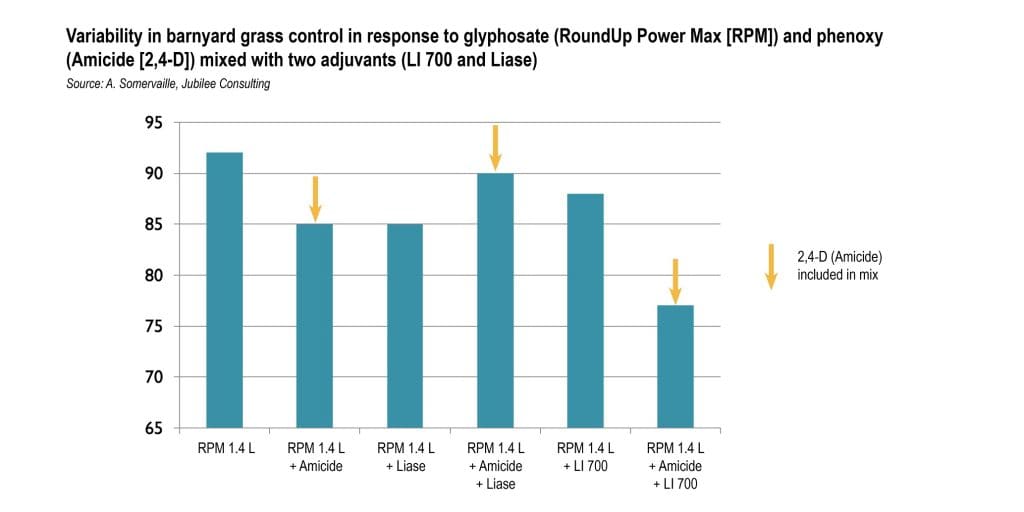 Grower experience, research trials and computer modelling all point toward high levels of herbicide performance, coupled with the removal of survivor plants, to reliably and sustainably extend the useful lifespan of herbicides by removing potential carriers of resistance traits.

“Even small incremental losses in control at the ‘top end’ can have a large effect on the total seed-bank load,” Mr Somervaille said.

“While 95 per cent control might still be considered a good result from a herbicide application that could have potentially achieved 98 per cent control, this three per cent loss in efficiency could be the start of a substantial increase in weed numbers and allow herbicide resistance to gain a foothold.”

Keeping weed numbers low allows the targeted use of more expensive products (e.g. through an optical sprayer), makes manual control methods economical, and even allows the use of less efficient products to maintain or slightly reduce numbers while adding diversity to the program (provided there is no cross-resistance).

What are adjuvants and what do they do?

An adjuvant may modify the physical, chemical and biological activity of the herbicide on the target. For example, an adjuvant may be added to improve the physical properties of the spray such as its spray quality, or to allow products to dissolve or mix in water. Adjuvants may also alter the chemical properties of the formulation to counter poor water quality or activate certain components in the herbicide, and from a biological perspective an adjuvant may be used to influence uptake through the plant cuticle and even movement across cell membranes.

Very small amounts of surfactants are required to achieve adequate ‘wetting’ of the plant surfaces and adding more surfactant will not necessarily increase the performance of foliar applied herbicides. However, some adjuvants (including surfactants) are added specifically to activate the active ingredients and so are an essential component of the formulation or mixture.

The same adjuvant may even perform different functions when included in different mixes or added to different formulations. There are also specific responses in certain weeds to certain surfactants, some giving superior results and other inferior. It is not possible to give rule-of-thumb recommendations – each scenario needs to be examined carefully, taking into account the target weed species, the condition of the weeds, the water quality and the specific herbicide formulations.

They are not always beneficial and can result in sub-lethal doses being applied if they are not used correctly. Combinations of surfactants can modify the functions of the individual components and it cannot be assumed that the effects are additive to herbicide performance.

Also, be aware that the characteristics of the leaf cuticle are not the primary limiting factor associated with the uptake of foliar applied herbicides. Plant stress is usually the main limiting factor and this may only be partly overcome through the use of an adjuvant.

Clearly, it is not a simple matter of making recommendations or decisions to include an adjuvant. Growers and their advisors need to have an appreciation of the chemistry behind the adjuvant’s use and the way that it may impact on the uptake of the herbicide into the target weed.