The rot begins to set in on winter cereals

CROWN rot disease is beginning to flare in winter cereal crops across the northern farming zone. 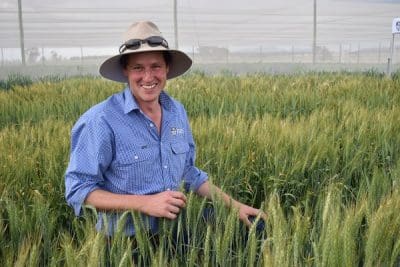 B and W Rural senior agronomist, Rob Long, Moree, said there were increasing signs of the damaging fungal disease showing up in crops.

“In the crops that had a good start and developed good early biomass, we are only just starting to see it. It is normally about now that it appears. Normally from September 15 to 25 it really shows. I expect we will see quite a bit of it over the next week,” he said.

“I looked at a trial at North Star and all the varieties there were riddled with it and it’s looking like up to 50 per cent losses. So, I think it will be a crown rot year.”

Mr Long said crops in the region were trying to fill grain under heavy moisture stress, pulling moisture from 50 to 80 centimetres deep because they had exhausted the supply early. 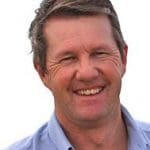 “So, it puts a lot of pressure on the crops. It is mid-grain fill when all the white heads (from crown rot) show up,” he said.

Mr Long said one of the scenarios where crown rot might not be an issue this season was on those crops that were under moisture stress early and hadn’t set themselves up for a big biomass.

“They might only ever have been targeting 1.5 to 2.0 tonnes/hectare and will fall over the line at 1.2t/ha. They probably aren’t going to show much (crown rot) effect because they have been under so much pressure the whole way,” he said.

“There is nothing growers can do about it this year. The die has been cast. There are lots of things they can do with a long term plan. That is what crown rot is all about – long term plans.”

Meanwhile, researchers at the Plant Breeding Institute at Narrabri in north-west NSW have been working on developing wheat varieties with improved resistance to crown rot disease.

Despite significant efforts in the past, improvements in resistance in commercial varieties have been limited to date.

In the north there is only Fusarium pseudograminearum, while in the south in the cooler regions of Victoria and South Australia there is another pathogen, Fusarium culmorum.

“So, the only saving grace with crown rot disease is we don’t have to try to have resistance to multiple pathotypes or races. It is common across the different isolates and species.”

Dr Davies said fungicides were not an effective control for crown rot infection. 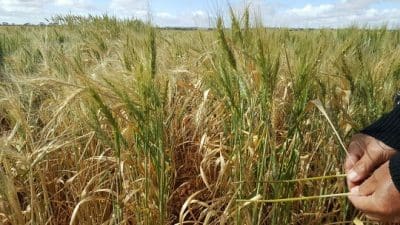 White heads are a telltale sign of crown rot in cereals.

“It has a lot to do with how the pathogen infects. If you have the right environment of a couple of days of cool, moist weather and there is direct contact between the stubble and the tillers you can get crown rot infection,” he said.

“So, you would need a fungicide that was available to provide protection throughout the life of the crop. That will break your bank account and will also breed resistance to every other pathogen because you are continually applying fungicides.”

Likewise, Dr Davies said seed dressings were not a long term control for the disease.

“Can seed dressings control crown rot? The simple answer to that is: “No you can’t”. You might be able to delay the infection, but you are certainly not going to be able to stop it,” he said.

“At the end of the day the management options of rotations, inter-row sowing, nitrogen management, grass weed control and varietal selection are all part of crown rot management. Fungicides are not part of that.”

Dr Davies said the carryover of crown rot inoculum on stubble was the main means of transmitting the disease from season to season.

“Regular rain events in the first part of the year provide a lot of opportunity for the fungus to infect the plant and make a home for itself. Once the plant senesces at the end of the season the fungus runs up the inside of the lumen. That’s all the inoculum for the following season,” he said.

“If you have infected crops, they will be huge sources of inoculum for the following year and even further if you have a couple of dry summers that don’t promote the breakdown of stubble.”