The secret life of crown rot: what happens after harvest?

A GREATER understanding of how the crown rot fungus survives post-harvest could pave the way for grain growers in the northern farming zone to better plan management strategies and avoid costly yield losses. 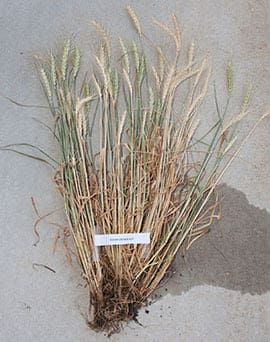 Crown rot is a significant disease of winter cereal crops in New South Wales and southern Queensland and is estimated to cause losses of $37 million in wheat and $6 million in barley production annually across this region.

It is estimated to cause losses of $37 million in wheat and $6 million in barley production annually across this region.

Research to date has largely focused on understanding the infectious phase of the disease and improving growers’ knowledge of how the disease impacts and causes yield losses in living crops to guide development of a range of integrated management strategies.

However crown rot, which is predominantly caused by the fungal species Fusarium pseudograminearum (Fp), spends most of its life cycle surviving inside stubble and significantly less is known about this phase.

“Even though inoculum survival in cereal stubble is a major challenge for crown rot management there has been less research attention spent on this area,” Ms Petronaitis said.

“But what this early work indicates is that in the right conditions the crown rot fungus can actually significantly increase, or grow up the length of the stem in cereal stubble.”

This preliminary survey found that in northern NSW and Queensland the crown rot fungus was commonly present at crown level in one in two stems.

Surprisingly one in five stems collected in the north contained inoculum at 18 centimetres up the stem at harvest in 2017, while one sample (out of approximately 65) had crown rot at 33cm.

“This data was only from one year but what it showed us was that it is possible for crown rot to get up the stem in paddock situations,” Ms Petronaitis said.

“What we don’t know is what drives Fp up the stem and how far it can get.”

So as part of her project she began to investigate whether crown rot inoculum would grow up the length of the stubble under specific conditions.

What she found was moist conditions could promote growth of the crown rot fungus post-harvest in inoculated cereal stubble – increasing by almost 1cm up from the crown per day at 100 per cent humidity.

“Wet conditions and high humidity appear to have the potential to cause an explosive increase in the growth of Fp in cereal stubble,” Ms Petronaitis said.

“While we don’t understand the relationship between this laboratory study and field conditions, it reinforces that inoculum levels are not static within stubble, and they may fluctuate with different weather patterns during fallow or break crop periods.

“If moisture conditions allow, Fp is likely to progress up the stem after harvest regardless of cereal stubble type such as barley, wheat or durum.”

“This supports what we already know and recommend to growers that cereal or variety selection can increase yield, but may not reduce inoculum levels under crown rot pressure.”

What this may mean for crown rot management

Understanding more about how and why the fungus moves during the stubble phase will be part of ongoing research in this area by Ms Petronaitis.

She hopes this research investment by the GRDC will provide growers and farm advisers with insights that help guid future management strategies.”

“At the moment the best thing growers can do is to send a stubble sample for testing (see details below) to determine their risk for next season based on inoculum levels.

“We need paddock validation of stubble height management options before anything can be recommended.”

However, Ms Petronaitis said one way to potentially restrict the growth of the crown rot fungus within stubble could be to reduce stubble length, in other words lower the harvest height. 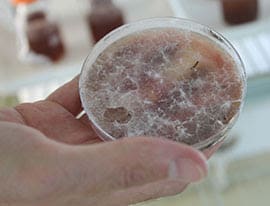 Crown rot, which is predominantly caused by the fungal species Fusarium pseudograminearum (Fp), spends most of its life cycle surviving inside stubble and significantly less is known about this phase.

“This would limit the suitable material for the fungus to colonise, even if moisture conditions were ideal for growth,” she said.

“Keeping inoculum levels low is vital to reduce the risk of infection and outbreaks, and limit yield loss to crown rot in future cereal crops.”

But Ms Petronaitis said the trade-off between harvesting low to reduce stubble-borne inoculum levels and the benefits of harvesting high would require further investigation.

“We know harvesting high (e.g. 40-60cm using stripper fronts versus 15cm using a conventional header) has been shown to increase harvest efficiency and reduce harvesting costs by 37-40 per cent in south-west NSW,” she said.

“Therefore, early identification of paddocks which would benefit from having reduced stubble height is essential to balancing disease risk and overall profitability.

Ms Petronaitis said this could possibly provide benefits by limiting the available stubble load for the crown rot fungus to grow into thus capping inoculum at a lower height.

Additionally, she said when harvesting the break crop (e.g. chickpea), the cereal stubble proportion of header trash would be reduced, thereby reducing the amount of stubble (and potentially crown rot inoculum) dispersed.

“This would help ensure clean inter-row spaces for the next cereal crop to be sown into, with the aim of preventing crown rot infection by avoiding contact between existing crown rot infected stubble inoculum and emerging cereal plants,” Ms Petronaitis said.

“This type of management strategy may also provide benefits with a range of other stubble-borne cereal diseases including common root rot, yellow leaf spot and net blotch, which all survive in retained cereal stubble.”

What we know for sure…

The Tamworth-based researcher said what this early work had shown was that growers need to be aware of inoculum levels in retained cereal stubble to make informed crown rot management decisions.

“Some seasons, for example a wet finish, and some varieties, such as barley, are not always conducive to crown rot expression even when infection is present,” Ms Petronaitis said. 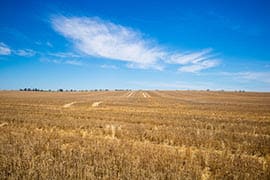 Pathologist Toni Petronaitis said it was imperative growers and farm advisers used crown rot diagnostic services through NSW DPI and risk predictors such as PREDICTA B to determine the presence of crown rot inoculum in suspect paddocks to guide disease management decisions.

“This means inoculum can be found in stubble without having observed obvious crown rot symptoms (e.g. whiteheads or extensive stem browning) in that season.

“So, this ‘silent inoculum’ could lead growers to believe they have clean stubble, when in reality there is crown rot inoculum waiting to infect the next cereal crop.”

Of particular concern for this season is the ongoing dry conditions experienced in the north, meaning inoculum is persisting longer in paddocks as stubble breakdown is slowed.

Stubble from 2017 or even 2016 cereal crops infected with crown rot could still provide sufficient inoculum to infect a new wheat or barley crop in 2019.

This was why she said it was imperative growers and farm advisers used crown rot diagnostic services through NSW DPI and risk predictors such as PREDICTA B to determine the presence of crown rot inoculum in suspect paddocks to guide disease management decisions.

Stubble samples to determine risk based on inoculum levels can be sent to: