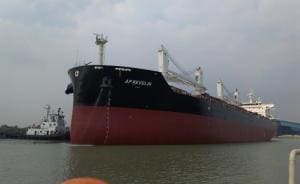 The AP Revelin left Mackay on Saturday bound for the sub-continent with this season’s first load of chickpeas.

THE first export shipment of chickpeas from this year’s harvest left the Queensland port of Mackay in the bulk carrier, AP Revelin, on Saturday, bound for the Indian sub-continent.

Another two chickpea shipments are set to follow from Mackay and Gladstone in the next week or so.

Each of these first three new crop bulk desi chickpea shipments are expected to be around 30,000 to 35,000 tonnes.

Following the October consignment, at least two subsequent bulk shipments are scheduled to load ex Mackay, Gladstone and Brisbane as harvest advances southwards through Queensland into NSW in November and December.

Most shipping activity will be container movements, through Brisbane and Sydney container terminals which will account for, over 12 months, possibly 800,000 tonnes of desi chickpea.

Container shipments started in October through Brisbane from local and inland packers, and will continue at full capacity beyond Christmas.

Australia is expected to produce a total desi chickpea crop of about 1mt this season.

Harvest in Central Queensland has struck mostly fine weather, though heavy-yielding crops have made progress slower than expected.  About half the area has completed harvest.

Volume is higher than last year and quality overall is good, though mould has been evident in some loads presenting at receival sites.

Additional segregation has been employed at these sites and analysis/identification of the mould spores is taking place.

Queensland’s western Darling Downs has commenced chickpea harvest where early-sown crops were able to mature in October. Chickpeas are being delivered to Downs container packers and to Brisbane.

Pulse Australia’s chief executive officer, Nick Goddard, said buyers were pressed for delivery in October and November, and deliveries of quality chickpeas during these periods were attracting a premium.

“What is driving this is that even though the Indian monsoon did arrive and conditions there are looking much better, there is also a huge pipeline to fill throughout the supply chain down to the street vendor in the village market in India,” he said.

“Australia chickpeas have a long history of trade to India and have a very good name generally for quality.”