CANOLA growers can rest assured that sowing retained seed from open pollinated (OP) varieties will have no deleterious effect on crop performance. 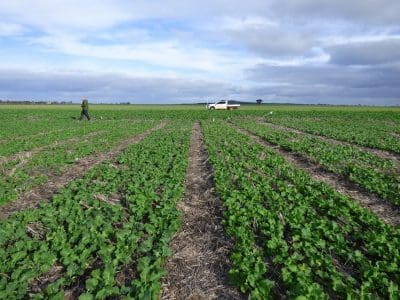 DAFWA senior research officer Mark Seymour inspects a trial of retained canola seed at Wittenoom Hills in July 2016. DAFWA trials have confirmed there is no detriment to yields and oil content from using retained OP seed.

Field trials by Western Australia’s Department of Agriculture and Food (DAFWA) have shown no negative impact on establishment, yield or oil content in comparison to fresh OP commercial seed.

OPs are the most widely sown canola type in WA, with the popular variety, Bonito, accounting for 38 per cent of plantings in 2016.

There are likely to be significant plantings of OPs this winter due to a shortage of hybrid canola seed.

Trials in 2015 and 2016 in the south east of the grainbelt, at Wittenoom Hills and Grass Patch, compared the performance of Bonito seed retained for one generation (F2) and two generations (F3) against commercial seed, sown at a rate of 40 plants per metre square.

“The oil percentage of the three seed types was also consistent, with no significant differences between generations.”

There was no significant difference in the gross margins of the different seed types.

“An economic analysis found a gross margin for the F2 seed was $607 gross margin, while the F3 was $597, in comparison to the commercial seed margin of $578,” Ms Bucat said.

“The results in 2016 at Grass Patch and Wittenoom Hills were consistent with previous experiments conducted in WA and eastern Australia, giving growers the scientific evidence to have confidence in using retained OP seed.”

However, Ms Bucat warned growers who were intending to use retained seed to have it subjected to a germination test, to ensure its performance.

“Stored canola is more sensitive to heat and moisture than cereals, so it is an important risk management strategy to send a sample to the DAFWA Diagnostic Laboratory Services team to make sure it is going to perform as expected,” she said.

Ms Bucat also suggested grading any retained seed, as department trials have shown small seed does not always perform as well as seed greater than 1.8 millimetres in diameter.

“A trial at Mingenew in 2016 found that small OP seeds (less than 370,000 seeds per kilogram), had a 50pc lower establishment rate, 16pc yield reduction and a 23pc gross margin reduction compared with plots sown with larger seeds of 230,000 seeds/kg,” she said.

“As a result, it would be wise for growers to get their seed graded to ensure they sow medium to large sized seed that will enhance crop establishment.”