GRENFELL mixed farmers Rob and Mandy Taylor have had back to back success after being confirmed as state champions in the Suncorp Bank Championship Dryland Field Wheat Competition for the second year in a row.

Run by AgShowsNSW, the peak body for the state’s 192 shows, the competition is judged across four regions ahead of the state final.

To make the state finals, the top five crops in four regions are identified and then compared to determine the state winner, with results announced in Dubbo on Saturday.

Mr Taylor said the win came as a welcome surprise in a year of challenging wet conditions and the highest financial output on record.

“We had some good crops but I thought there would be others in front so it was quite a shock,” Mr Taylor said.

“We got our timing of our fungicide spot on and we were fortunate that it dried up at the right time because we could have had a disastrous finish otherwise.

“What also really helped us this year was having controlled traffic tramlines.

“That made the paddocks more accessible and we could get on them to apply fungicides because there’s a lot of disease pressure this year with all the wet weather.”

Combined with a well-drained deeper red soil, an outstanding crop awaited the judges at Glenalla.

“We’ve spent a lot of money this year, there’s no doubt about that.

“Fertiliser prices are through the roof and we spent a lot on fungicide so it’s high input, high output.

“The win is certainly rewarding because it’s definitely been the most expensive crop I’ve ever grown.”

The Taylors topped the central region with a point score of 218 for their 7.3t/ha, ahead of Keith and Kate Perrett in Gunnedah on 7.1t/ha for 215pts and Plantation Trading in Premer with 198 points for a 6.4t/ha crop.

The central region stretches from Quandialla to Carcoar, Coonabarabran, Merriwa and Tamworth.

In the durum yield competition, Bob and Dy O’Neil-Shaw from Quirindi scored highest for their 8.5t/ha crop to achieve 238 points, ahead of Michael Smith from Moree who scored 227 points for his 8t/ha crop, and Mitch and Cameron Waterhouse on 199 points for their 6.7t/ha crop.

The TJ Dwyer Farming Excellence award went to Charlie Scott, farm manager of Baroma Downs at Croppa Creek, who impressed the judges with his knowledge and practices.

For the O’Neil-Shaw family operation, son Jack O’Neil-Shaw said this year’s crop was powered by a not-so-secret weapon: chook poo.

“The cost of urea was so high that we put 1.3t of chook poo on it and even that was pretty hard to get a hold of because everyone must’ve been thinking the same thing,” Mr O’Neil-Shaw said.

“The other factor was the breed we used was Westcourt this year and its disease resistance is a bit better than some of the older varieties.” He said the 2022 crop was a joint effort with wife Cecile, brother Ned, and parents Bob and Dy, and with the guidance of agronomist Sam Gulliford.

“It was a pretty cool achievement and now we have to see if we can back it up and do it again next year.”

Heavy rainfall in 2022 impacted crops sown later in the season, and continued to present difficulties for sponsors Suncorp throughout the judging process.

“It was incredibly challenging with the flooding and wet weather and sponsors Suncorp needed to go to each farm in each region individually to inspect the wheat,” AgShowsNSW president Peter Gooch said.

“With so many roads cut off, sometimes a two-day judging became three days including huge detours of a couple of hundred kilometres and northern judging was pushed back a full week as Narrabri was entirely flooded.

Suncorp has sponsored the annual wheat competition for more than 10 years, a tradition Ben Graystone, Suncorp district manager for northern NSW, said the company is proud to uphold.

“It gives us great pride to be associated with the competition,” Mr Graystone said.

“It keeps our finger on the pulse with what’s going on in the farming sector, and it’s a good opportunity to meet new customers (and) reconnect with existing customers and it’s a great educational opportunity for our managers, assistants and our graduates.”

“This year the team really pulled together to get the judges to where they needed to be and when we did get there, some fantastic crops were being judged and there’s still some great crops which is really pleasing to see.” 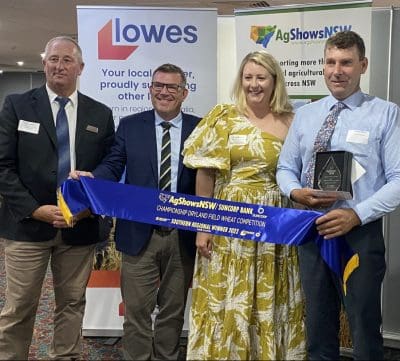 In the southern region, a 7.2t/ha crop grown at Old Junee by Steven and Dr Felicity Harris and J&J Gummer scored 216 points ahead of John Ingold & Co of Temora with 214 points for a 7t/ha crop, and Baldry & Sons in Wallendbeen with 212 points, also for a 7t/ha crop.

The southern region stretches from the Victorian border to Ariah Park, Boorowa and Young.

In the northern NSW competition, David Smith of Croppa Creek won top honours with his 7t/ha crop which scored 209 points, ahead of Blake Phillips from Moree in second place with 205 points for this 6.9t/ha crop, and the Browning family of Narromine in third place with 197 points for their 6.45t/ha crop.

The region stretches from Gilgandra and Narromine to Bingara, North Star and Walgett.

In western NSW, a 6.8t/ha crop grown by Brent and Kendra Kerrisk at Ganmain scored 203 pts to secure top place, followed by Greg Dickins‘ 6.7t/ha crop at Berrigan with 201 points, and Josh Male from Peak Hill with a 6.1t/ha crop with 193 points.

The western region stretches from Deniliquin to  Tullamore, Peak Hill and Urana.