THE potential to produce cheaper medicines within edible plants including canola and lettuce has taken a significant step forward. 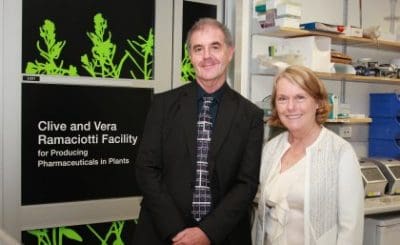 University of Queensland (UQ) and La Trobe University scientists have produced proteins suitable for developing drugs in plants, on a large scale.

UQ Institute for Molecular Bioscience (IMB) researcher Professor David Craik said cyclotides were a type of protein with a circular structure that makes them less likely to break down in the digestive system.

“This makes them more suitable to be developed into oral drugs such as painkillers and cancer treatments,” he said.

The study was led by La Trobe Institute for Molecular Science researcher Professor Marilyn Anderson, who said the chemical process to artificially make cyclotides was expensive and produced low yields.

“We have now proved that using the right enzyme in plants improves the process of creating robust cyclotides from the linear peptides from which they originated,” Professor Anderson said.

“Working with the biotechnology company Hexima Ltd, we have shown that this technology works in common plants including Australian native tobacco, which has been adopted globally as a biofactory for protein-based pharmaceuticals, as well as bush bean, lettuce and canola.”

“Cyclotides have the potential to create a revolution in medicine, and particularly in developing countries where medicines need to be both affordable and maintained in an active form through transport and storage,” he said.

The findings were published in the Journal of Experimental Biology and funded by a Ramaciotti Biomedical Research Award and the Australian Research Council.