ANY likelihood of Victoria producing as much wheat as NSW from the upcoming harvest now seems unlikely in the wake of its dry start to spring, which has Mallee and Wimmera crops looking for rain this week to bolster yield outlooks and offset some frost damage. 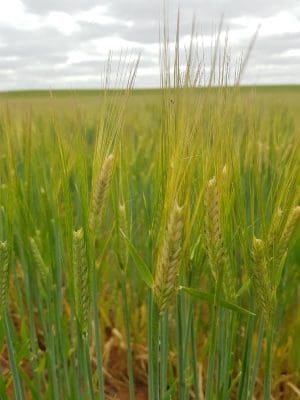 In late winter, some Victorian growers saw their 2017 wheat crops as having the potential to out-yield last year’s bumper crop which weighed in at 5.2 million tonnes (Mt), according to ABARES estimates.

Compared with ABARES most recent 2017 crop estimate of 6.3Mt for NSW wheat, a Victorian crop which eclipsed last year’s production would have put it into the ballpark with NSW, which has a five-year average to 2016 of 7.8Mt.

However, ABARES’ latest forecast for Victoria’s 2017 wheat crop stands at 3.5Mt, 200,000t above its five-year average to 2016, and recent showers have given some help to NSW, where frost and a lack of in-crop rain have depleted yield outlooks in many areas.

In Victoria, Landmark Birchip agronomist, Bruce Adriaans, said stored moisture reserves for most crops in the Southern Mallee had all but gone, but average to above-average yields should still be achievable.

“Anything with some stored soil moisture that got off to a good start is looking at above-average yields, and even though water damage and mice damage have been big problems in some areas, 15 to 20 millimetres of rain should see those crops home,” Mr Adriaans said.

However, Mr Adriaans felt many crops would be more likely to achieve average yields, especially if emergence was patchy due to soils crusting after sowing, or if they were planted into cereal stubble and have battled to get adequate nitrogen.

“Wheat planted into fallow or legume stubble would be looking at a yield of up to 3 tonnes per hectare, whereas wheat on wheat would be 2t/ha; the average of 2-2.5t/ha should be achievable for the vast majority of wheat.”

Mr Adriaans said earlier-sown crops were starting to fill with grain, and the lack of rain was starting to have yield-limiting affects.

“But if the system that’s forecast to come through on Wednesday gives us even 12 millimetres of rain, it should top us off nicely.”

At Robert Smith & Co at Warracknabeal in Victoria’s Wimmera, agronomist Andrew Golder said the region’s crops were also in need of rain.

“We’re still looking at average or better yields, but we’re hanging our hopes on rain this week,” Mr Golder said.

“Barring a massive frost or a couple of stinking hot days, things could limp home from here, but 10mm would nearly get us through.”

He said the region’s wheat crops were now flowering or filling, and harvest was likely to start in mid-November.

“After average rain in July and August, the whole Wimmera and Southern Mallee looked fantastic, but it’s been a pretty dry six weeks, and we’ve had a little bit of frost damage.”

Mr Golder said crops looked to be able to achieve yields of around 3t/ha, with 2.5-3t/ha being the district average.

While many wheat crops on the inner slopes of NSW appear to be on track for average yields, prospects for plains and outer slopes crops in much of the state are not as bright.

“We won’t be breaking any records this year; it will be below average for sure, and it’s really about who got the rain and who didn’t this year, not paddock history.”

“It’s hard to tell what will happen; it it keeps raining some crops won’t be too bad, but a few people are cutting crops for hay.”

At Forbes in central NSW, IMAG agronomist Cameron Corke said the crop was “all over the shop”.

“The frost had an effect, and so did planting time, and now it’s moisture stress as well,” Mr Corke said.

“There’s going to be no big crops around at all.”

Mr Corke said some wheat crops which were hit by consecutive and long-lasting frosts produced late tillers which have come to nothing due to dry conditions in recent weeks.

“We definitely aren’t going to get average yields this year; there won’t be much grain around, especially north of Forbes, where the crops aren’t as good as they are to the south.

“What rain now will do is put weight into the grain and improve the quality, but it won’t give us more grains.”

Mr Corke said he estimated wheat yields for the district at around 2t/ha, about 0.5t/ha below the average, and well below last year’s bumper yields of 5t/ha plus.

Midweek showers are forecast for much of the NSW grain belt.