An NDVI image from DataFarming of a paddock at Gollan east of Dubbo, where uneven germination and waterlogging are warranting the use of VR nitrogen application. Image: Binginbar Farms

VARIABLE-RATE (VR) nitrogen application is delivering positive results for three New South Wales growers who are moving into precision agriculture for different reasons, and shared their experiences in a webinar on Wednesday hosted by DataFarming.

The Toowoomba-based software company uses NDVI imaging from satellites as a means for growers to access low-cost files growers can use to guide their equipment in VR applications, and the webinar heard from two growers who are using them, and one who is not.

The webinar was watched by around 300 registered viewers, including growers, agronomists and researchers, and DataFarming managing director Tim Neale said the session was designed to show how precision agriculture can help overcome seasonal and long-term hurdles.

The biggest this season has been high fertiliser prices, and waterlogging has also been evident as an inhibitor of fertiliser efficiency.

Speaking after the webinar, Mr Neale said DataFarming was closely monitoring the uptake of VR. 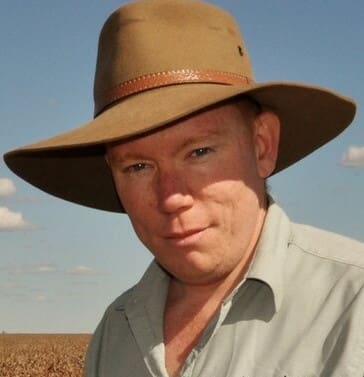 “We haven’t got the exact numbers yet, as there is still plenty of crop being planted,” Mr Neale said.

“Canola is mostly in, but wheat and barley are way behind.

“We are just starting to see the kick up, and the reason we were running the webinars is that we expect to see a massive increase in VR use this season.”

Entitled Maximise Your Fertiliser Value, the webinar heard first from Mark Day of Woodlea Ag Enterprises, who is using DataFarming’s rapid zoning images at $0.50 per hectare to provide the “shape file” which Mr Neale said can be worked into most modern machines.

Mr Day farms in a family partnership near Lockhart in the southern Riverina, and runs a four-year rotation of pulses, canola, wheat and barley.

The Days got into variable-rate application for phosphorus replacement more than 10 years ago, and most of their country has also had lime or gypsum added over that time.

“We haven’t been in the space of variable-rate nitrogen, even though we have the equipment to do it,” Mr Day said.

“Nitrogen’s the big thing at the moment, and something we’re all battling with on how to manage, especially the price.”

Mr Day said nitrogen deviations in a 450ha paddock of canola were evident in the NDVI images available through DataFarming, and a satellite image taken May 22 provided the “shape” for their first VR nitrogen spread.

“At the time, we had enough for a 100kg/ha spread, and just wanted to use that better on the block.”

Canola has a big appetite for nitrogen and, despite the paddock having faba beans last year following wheat the year before, Mr Day gave good zones 80kg/ha, average ones 100kg/ha and deficient ones 140kg/ha.

The exercise used 44.5t in total over the paddock with variable soil types.

Recent wet weather means the upcoming in-crop urea application may well be a flip of the previous.

“Now we’ll do the reverse; those blocks that have been waterlogged… are going to be limited, and we’ll probably push the dry country a bit harder now.”

At Gollan, 50km east of Dubbo, the Simpson family crops around 3000ha of the 3850ha Binginbar Farms in a canola-barley-wheat rotation on what Nathan Simpson described as “very variable soils” ranging in depth from around 10cm to one metre.

“We’ve got a very shallow bucket.”

“We just cannot store moisture like some of the black-soil country can.”

Mr Simpson said DataFarming’s images were being used this year to help rectify the impact from a less-than-ideal seeding when a new air-seeder did not arrive in time for sowing, and contractors had to be called in to get planting completed.

“Particularly this year because of waterlogging and air-seeder issues, it really made sense to use single NDVI. “

Mr Simpson said air-seeder blockages resulted in poor germination in patches, and these will get zero urea in the VR top-dressing.

“We haven’t saved any urea; that’s not the point of what we want to do.

“We want to maximise yield.”

Urea rates applied based on the DataFarming shape were zero, 50kg/ha and 100kg/ha for barley, and zero, 75kg/ha and 150kg/ha for canola and wheat.

“We’re about 20c/ha for these prescriptions, and it’s done the job really well.”

“It’s too late…to fix up any other stuff-ups, and all you can do is push yield potential where it makes sense to.”

Only a small number of paddocks across Binginbar Farms are not getting VR nitrogen application, and Mr Simpson said this was mainly because they did not have a big variation of soil types.

“Certainly on 90 per cent of the country there are big variations.”

Mr Simpson said not spending money on poorly established sections of crop looks to be a wise decision, particularly with waterlogging an issue in some paddocks.

“Areas with very low yield potential, we won’t be putting nitrogen on them.”

He said nitrogen spread on waterlogged country would volatilise instantly.

“It would be a waste of money.”

Binginbar has also used satellite imagery and other data from Western Australian company Laconik, and in 2020 did strip trials to test NDVI and their wider strategy based on VR.

“It’s a good way to validate decisions you’re making around nitrogen in crop.

“We didn’t do it last year; it was too wet to have a result.”

Broden Holland farms on sandy-loam country in a family partnership that crops 3800ha and has 1200ha of lucerne clover as well as running 4500 merinos at Thuddungra on the south-west slopes.

Their rotation is a seven-year wheat-canola phase, and then three years of pasture.

The Hollands do not use DataFarming images, but are variable-rate appliers of nitrogen using protein maps from the previous year’s wheat to dictate rates for fertiliser, which is broadcast after planting.

Using data from protein maps, lime, gypsum, manure and urea are all spread at variable rates.

“They’re the easy levers to pull.

“We’re focusing on getting all those even, and then getting our yield maps even.

“I’m saying: Let’s forget about yield maps for the moment and try and get our inputs even.”

The enterprise has in the past blended roughly 1000 tonnes of wheat to avoid discounts that would apply to their lowest-protein wheat.

“In 2020, we spread urea based wholly and solely off protein.”

“Every time I haven’t spread the map…I’ve kicked myself.”

An on-farm protein meter delivers grain results before each load leaves the farm.

“Every truckload we deliver, we know what it’s going to be.”

The Hollands supply wheat to the region’s flour mills, and said the benefit of delivering loads within a narrow range is primarily in increased farm efficiency but not dollars per tonne.

“There is definitely a discussion to be had in showing (mills) that we can send them a single percentage- protein wheat…and get the consistency for them.”