WHEAT growers in Western Australia whose crops have experienced delayed emergence due to low rainfall, have been advised to carefully match inputs to yield potential as the season unfolds. 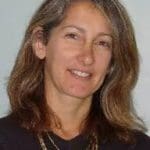 Many growers in the central and northern regions of WA have reported crops with staggered emergence, after widespread dry seeding and a lack of a substantial break to the season.

With below average rainfall for winter and spring predicted across much of the grainbelt, many grain growers are revising their 2017 strategies.

The Department of Agriculture and Food (DAFWA) has undertaken research studies and modelling to assess the likely yield penalty of delayed emergence.

DAFWA research officer Christine Zaicou-Kunesch said the yield potential of crops emerging in June could still be reasonable, depending on location, the amount of stored soil moisture and future rainfall.

Most growers along the southern coast and Lakes districts have had timely rains and sufficient stored soil moisture to achieve reasonable wheat yields this year.

However, growers in some areas, particularly the north-eastern agricultural region, could face significant yield reductions from delayed emergence of dry sown crops.

Predicted yield penalties at locations with delayed sowing from 20 May to 29 June ranged from 21 to 46kg/ha/day.

The modelling took into account the impact of seasonal conditions, such as frost, terminal drought and heat stress on crop responses. 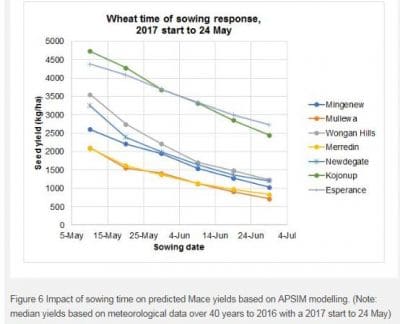 As opportunities for growing a profitable wheat crop diminishes, she said growers would no doubt undertake an economic assessment to determine how much, if any, fertiliser or crop protection inputs to apply.

“Growers will be taking into account current wheat prices and the seasonal forecast of below average spring rainfall when assessing their breakeven point,” she said.

“Management decisions should also take into account future needs.  Crops with low yield potential still need to be managed adequately to minimise the risk of wind erosion in summer and to prevent weeds impacting on the yield potential of future crops.”

Meanwhile, the department’s Statistical Seasonal Forecasting system (SSF) has been updated, showing the likelihood of continued below average rainfall for the majority of the grainbelt for winter.

The SSF is available for free at agric.wa.gov.au, where more information about delayed sowing and other cropping tools are available under the Climate, land and water and Crops tabs.