WESTERN Australian growers have delivered 2.63 million tonnes of grain to CBH Group sites in the harvest to November 15, with intake for the rain-interrupted week adding 1.43Mt to the state’s total, according to CBH Group’s latest weekly harvest report.

Table 1: CBH Group receivals from the Western Australian harvest to date, and the week to November 8. Image: CBH Group

Esperance and Albany zones have been very slow compared to this time last year, while the Geraldton zone appears to be having a bumper harvest so far.

Most deliveries to date have been barley, and CBH Group said malting receivals were on the rise as harvest moved into the Albany zone.

About 20 per cent of the barley delivered to date has been malting, and its values firmed slightly in the past week, with a number of malting varieties including La Trobe up $2-3 per tonne.

CBH Group said international and domestic interest in feed and malting barley has been evident, and balance sheets for both segregations were tight for malting particularly.

CBH Group said wheat protein levels were looking positive, with an average of just above 10.5pc suggesting they have held up well in a year where yields to date have been above expectations.

Canola oil levels have been down slightly in the year to date, with the average being close to 45pc, down from 47pc last year, and some European interest has appeared in the market, where grower prices have remained in the mid-to-high $580s/t. 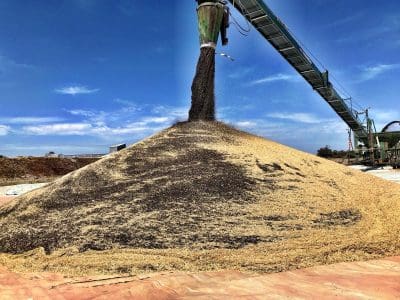 Bunge operates two up-country sites and a grain terminal in WA to make it one of the state’s secondary bulk handlers also receiving canola and grain. Photo: Bunge WA

“Last weekend saw wet weather events across all four zones, with both the Geraldton and Esperance zones receiving heavy rainfall and even hail, with reports that spot fires due to lightning caused some damage to crops as storms passed over the state.”

“While not ideal, this is the first year we have used the CDF app across the entire network and some teething issues are not unexpected.”

Most grain received to date has been barley, and yields and quality so far have been good.

“Widespread rain across the northern parts of the zone slowed harvest progress during the week, but growers are now getting a start with harvest under way in all areas other than the most western parts of the zone,” Albany zone manager, Greg Thornton, said.

Widespread rain on November 10 disrupted harvest across the Esperance zone, where falls ranged from 2-80 millimetres, and were followed by light showers early in the week.

Esperance zone manager, Mick Daw, said growers were now back into harvest, and reasonable tonnages were being delivered.

The first load of high moisture wheat was delivered on Thursday to kick off wheat deliveries in the zone.

“Sites are extending hours and community sample huts are opening as we get into full swing.”

Geraldton zone had another slow start to the week with weekend hail, rain and fires throughout delaying harvest and damaging some crops.

Receivals to November 15 in the Geraldton zone have been made up of mostly wheat, with equal amounts barley and canola, and some lupins, with yields and quality reported as high.

“On Tuesday afternoon, we started to really pick up, and we are starting to now see canola and barley dropping off and growers moving over to wheat,” Geraldton zone manager, Duncan Gray, said.

“All sites are now open throughout the zone, and I’m looking forward to favourable weather for growers to get a decent run at this harvest.”

The Kwinana zone had a slow start to the week following rain over November 10-11.

“The majority of crop coming in is still barley, but we are now starting to see canola and wheat deliveries pick up,” Kwinana assistant zone manager, Allan Walker, said.

“Yields across most of the zone are higher than expected in all grains, which is good news.”