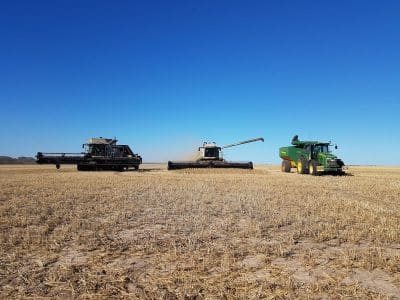 WESTERN Australian bulk handler CBH Group has received 1.71 million tonnes (Mt) of grain in the week to 20 December to take its total harvest intake to its season estimate of 14.8Mt.

CBH said growers in the Geraldton and Esperance zones were finishing their harvest programs, with a few sites already closed, and more scheduled to close before Christmas.

Kwinana and Albany zones are expected to continue operating at a decent pace into the New Year, with Kwinana still expected to break its record for total tonnes received.

“Much of the Kwinana zone is still in the full swing of harvest, and with a full shipping program for December and most of January, we are putting measures in place to ensure that we can move grain through the network efficiently, and meet our record shipping demands,” CBH general manager operations David Capper said.

CBH has reported the past week has seen some aggressive buying as the trade and end-users look to cover before the Christmas break, and good interest from growers selling grain at strong prices.

The trade has focused on execution, with a busy shipping program through January, with potential to continue into February, and CBH said it was likely to break its shipping records for both months.

In barley, selling volumes have slowed, as growers focus on selling wheat into a very strong market.

Feed barley remained in the range of $305-$310 per tonne free in store (FIS) this week, and attracted some grower selling.

The malting market remained reasonably subdued, with premiums of $10-15/t above feed being reasonably common across the malt varieties.

In wheat, volume sold by grower has been strong, with the trade looking for Australian Hard wheat in particular.

Pricing for Australian Hard (AH) hit $425/t FIS early this week, before easing to the low $400s at the end of the week.

Such strong prices have not been seen for some years, and reflect the lower percentage —approximately 10pc — of the crop going into the higher-protein AH segregations.

Grower selling of canola has slowed, to reflect a market sitting at $575-580/t FIS.

European buyers are now preparing for the holiday season, so international demand is expected to be slightly subdued as we move into the Christmas period.

The stop-start nature of harvest in the Albany zone continued in the past week with further rain delays.

Barley has continued to make up the majority of grain received overall, but the past week has seen mostly wheat being delivered.

Quality of barley has been reported as good, with close to half of it making malt grades.

Rain during harvest has downgraded small volumes of wheat, and feed segregations have been introduced to accommodate them.

“The north of the zone is now 95-per-cent complete, but in the southern and western areas, we expect harvest to extend into the New Year,” Albany zone manager Greg Thornton said.

The Esperance zone has ticked over the 2Mt mark for grain received, and exceeded its estimate for the season.

“Again, poor weather early in the week prevented some growers from finishing, but overall the zone had a good week,” Esperance zone manager Mick Daw said.

“Many of the Esperance zone sites are now closing, or will be finishing up before Christmas,”

The past week in the Geraldton zone has pushed its receivals to 3.18Mt, well above the 2.9Mt estimated.

“In the lead-up to Christmas, we will start to close some sites, but we will still operating in quite a few areas after the Christmas break and leading up to New Year,” Geraldton zone manager Duncan Gray said.

The Kwinana zone received 950,000t in the past week to bring its total receivals for the year to 7.4Mt.

“We are now starting to close sites in the Koorda and Merredin areas as growers finish their programs.,” Kwinana zone assistant manager Allan Walker said, adding that a number of sites would be open after Christmas and into the New Year.