HARVEST outcomes continue to improve in Western Australia with crops yielding higher than expected, prompting the Grain Industry Association of WA’s (GIWA) to lift its monthly winter crop projections by 9.4 per cent to 13.48 million tonnes (Mt). 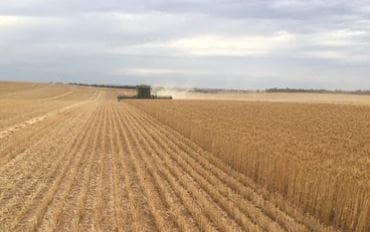 Wheat and barley crops in the West Kwinana, South East Kwinana, Esperance, Lakes District and Albany zones are all yielding higher than expected.

The impact on cereals from the late rains in September and very mild temperatures during October have combined to push most cereal grain yields to above average for these areas.

Cereal grain weights have been exceptional and have influenced the extra tonnes growers are harvesting.

Despite the extra tonnage, most wheat and barley crops are struggling to make the higher priced grades due to low protein content. The low protein grain is a result of lower than normal fertiliser use from the late start to the season and dilution from extra yield.

Canola tonnage estimates have increased from last month by around 33 per cent across the state due to a greater area being harvested than expected in the north. Whilst yields have been variable in the southern areas, the higher yielding paddocks have pushed grower averages above what was expected. The exceptional yields in the Esperance, West Kwinana and Albany zones have been the main contributors to this increase in estimated tonnages. It is also obvious now that the predicted extra area sown to canola at the start of the year was accurate and the extra opportunistic paddocks sown by many growers has added up across the state to contribute to this extra tonnage.

Most areas of the wheat belt have experienced several storm events over the last three weeks. Generally, these rainfall events have been light and have not slowed harvest down or resulted in significant decreases in quality.

There is likely to be close to 1.5Mt of grain produced in the zone which is an exceptional result considering the outlook at the end of June was well under half of this.

Growers in the Midlands region are well into wheat harvesting with most paddocks in the western areas yielding better than expected. With barley looking promising all year, wheat seems to have benefited more from the late rains and is unexpectedly yielding similar to barley. Wheat grain weights are very high with four tonne crops going 82-83 kilograms/hectolitre and very low screenings. The high grain weights, even with high yielding crops, is a story being repeated across the entire wheat belt this harvest.

Scepter wheat has out yielded Mace, in excess of 10pc in some cases, this will accelerate the move away from Mace in the region next year.

Noodle wheat deliveries have been higher than expected mid-year although likely to be short of historical deliveries. Most paddocks harvested so far have just made the minimum 9.5pc protein to make premium ANW1 grade. The current price spread of around $44/t between ANW1 and ANW2 has provided incentive for growers to take the time to blend loads to make the higher priced grade.

Barley grain quality is good although most loads are on the edge of protein to make malt grade due to the dilution of protein with the higher grain yields.

Canola grain yields have been quite variable in the region with the better crops in the western areas going up to 2t/ha and others in the same region struggling to make 1.5t/ha. In the eastern areas there is everything from canola crops sprayed out, to those left for grain going 300-400kg/ha up to 900kg/ha on the lighter soils.

Wheat and barley crops are consistently yielding at least 20 per cent higher than they look. This was the expectation with the mild finish prior to the start of harvest and is contributing to the upward revision in projected tonnages for the zone. Grain weights for wheat and barley is high and screenings very low.

Wheat and barley crops are generally struggling to make the higher priced grades due to missing the mark for protein. This is more pronounced further east as the risk to top-up with fertiliser was greater for growers due to the late start to the season. In the western parts of the zone where finishing rains are more likely most years, the grain proteins are higher and more of the crop is making the higher priced grades due to growers topping up with nitrogen as the season extended out. As more of the crop comes off it is evident the few frost events in September have had little impact on final grain yield.

Canola grain yields are variable as they are across most of the state. There does not seem to be any one set of factors influencing this. Variable emergence at the start of the season, difficulty in spraying weeds out at the correct timing, fertiliser rates, timing of insect sprays, significant blackleg leaf infection in the triazine tolerant varieties and late sclerotinia have all impacted to different degrees resulting in the wide range in crop grain yields. Excellent oil quality is the only common thread with canola.

Lupin grain yields have been exceptional with many yielding more than 2t/ha. Most lupins further south of the state are being retained for sheep feed and little is making its’ way to the bins for delivery.

The wheat grain yields in the eastern regions of the zone are better than expected but in most cases still well below average. Interestingly even low yielding crops are struggling for protein. This may be in part due to the very high grain yields in 2016 and low fertiliser rates used in 2017, exhausting nitrogen reserves in the soil. Many growers expected more mineralised nitrogen to be available for cereal crops in 2017 from the summer rains than was the case.

Grain deliveries along the Great Eastern Highway stretch and to the north are already backing off even with the late start to harvest. There are some very good wheat yields coming off around Tammin and Kellerberrin, east of Quairading down to Corrigin, Kulin and east around Hyden for growers who were lucky enough to receive some of the heavier storms during the year.

Canola has generally been disappointing with few crops yielding more than 500kg/ha.

Harvest is now well underway in the zone with some canola still to come off in the south and most growers into barley while some are starting on wheat this week. So far, grain yields for all crops are generally above average and expected tonnage for the zone is likely to be in excess of 3.2Mt.

Canola grain quality is good with most oil percentages in the high 40s. More barley is going malt than other regions of the state at this stage, with adequate protein even at higher than average grain yields. Recent rain events mean that colour and germ end stain is getting close to the edge for malt and screenings are very low.

The region has benefited from less waterlogging than is usually the case, along with lower leaf disease levels in all crops and a very mild finish with little frost.

Harvest is gearing up in the southern regions of the Albany port zone with most canola finished except close to the coast. Grain yields have been above average depending on the degree of waterlogging and frost. The more northern areas of the zone suffered from the severe frost events in mid-September and canola yields were quite variable in the worst hit areas around Pingrup, Ongerup and Nyabing.

Barley grain yields so far are above average and well above average in the lower rainfall areas away from the coast. Frost has had an impact on tonnages of barley for the region although it looks like the extra grain yields are going to minimise the effect on total tonnages for the zone. Barley for malt has been highly variable due to low protein and colour, and in some areas low weight where sections of paddocks were waterlogged. At this stage it looks like the percentage of barley for malt will be down 10 to 15pc on a normal year.

This region has been affected more than other areas from the rain and harvest has recently been slow going. There is a risk of falling numbers pushing wheat into the lower grades if more rain falls during the remainder of harvest.

The main issue for the region, as per most of the state, is low grain protein.

Wheat and barley grain yields are in the 2.5-2.6t/ha range for much of the area which is above average. Grain weights are very good for both wheat and barley as is the case for most grain in WA this year. About 30pc of barley deliveries are going malt which is about normal for the region.

Growers in the region are hanging out for a replacement for Scope barley which has suffered from lodging and head loss again this year. Sparticus has yielded well and if it makes malt grade next year it is likely plantings will increase dramatically.

Canola has been a bit disappointing in the region with most crops only yielding 0.9-1.0t/ha.

Lupin crops have been sensational with many going in excess of 2t/ha. Jurien has generally out yielded the other lupin varieties grown by 10 to 20pc.

Total grain production for the Esperance port zone is now predicted to easily exceed 2.8Mt. Both wheat and barley grain yields are coming in up to a tonne better than they look. Grain weights are exceptional with trucks struggling to remain under legal weight with a full load. The exceptional cereal grain yields are right across the board for all varieties. Many growers are storing on-farm temporarily in bags due to long queues at the bins.

Growers are starting to get some grain quality issues from recent rainfall events although most are well into harvest and the majority of grain will be harvested for the zone in the next 10 days.

WA Department of Primary Industries and Regional Development’s Ian Foster said thunderstorms were active across the cropping areas in November, but rainfall was highly variable. While many sites recorded around 10 to 15mm, some had three times as much. Despite this, total rain in November was below average along the west coast and across the south west, with the south coast and Esperance region being near average.

Overall, the 2017 growing season will be seen as a below average rainfall year. It was composed of two very different halves. The start of the growing season saw very dry conditions, especially for the northern agricultural region, while the second half experienced a significant improvement in rainfall, and crop yield potential.

Some frost events occurred during early and mid-October, but these were not of the major extent seen in 2016. They were mostly in the central and southern agricultural regions.

Most climate model rainfall projections for December 2017 to February 2018 are showing neutral probabilities, that is, no preference for either wetter or drier conditions. The DPIRD statistical rainfall outlook (see Figure 1) has some preference for drier than normal conditions over eastern parts, but the predictive skill is not good at this time of year.

A La Niña event has developed in the Pacific Ocean, but is likely to be a weak event and decay by April 2018. Its influence on Australian summer rainfall is expected to be quite weak.