RAIN throughout the cropping regions of Western Australia over the past few days has produced the break growers have been waiting for to get this season’s winter crops up and away.

In the latest crop report from the Grain Industry Association of WA (GIWA), analysts predict there could be nearly eight million hectares (Mha) of winter crop planted in WA this season, with wheat dominating the figures at 4.28Mha, while the barley area is set to expand to a record 1.91Mha.

GIWA Oilseeds Council chair and crop report author, Michael Lamond, said the rain was not predicted until the last few days in May and at that stage it was looking like a mid-June break at best.

He said whilst later than many would have liked, the rain over the last three days had still been a welcome change.

“The chance for average grain yields across the medium and lower rainfall regions has diminished in the last month as opening rains have only been received by most growers in the last few days,” he said.

“The later than ideal start to the growing season for most and lack of sub-soil moisture means that winter and spring are going to need to be better than normal to return average grain yields.”

Mr Lamond said many crops in the southern half of the state had germinated from the light mid-May rainfall and were sitting just under the soil surface when the rain arrived on the weekend.

“These crops will have the jump on those germinating now although with some reduced vigour. Most crops in the north of the state have had no rain whatsoever until now and the transition zone between north and south has seen many crops that did germinate earlier fail, needing to be re-sown or left with low plant density.”

The crop area mix has changed little in the last month. The trend to increasing barley has eventuated in most areas except the north, canola and lupin area is down, oats for hay are up in traditional hay areas and pasture/fallow area is up.

The wheat area has continued to be substituted by barley and, due to the late start, country has been left out that was initially to be sown to wheat.

Wheat area is likely to be historically low at less than 52 per cent of the total crop area in 2019.

This will also be the largest area of barley planted for the state on record.

The subtle shift to pasture from the late break, and the increasing profitability of sheep has seen the total predicted area of crop drop to below 8m hectares for the first time in many years. 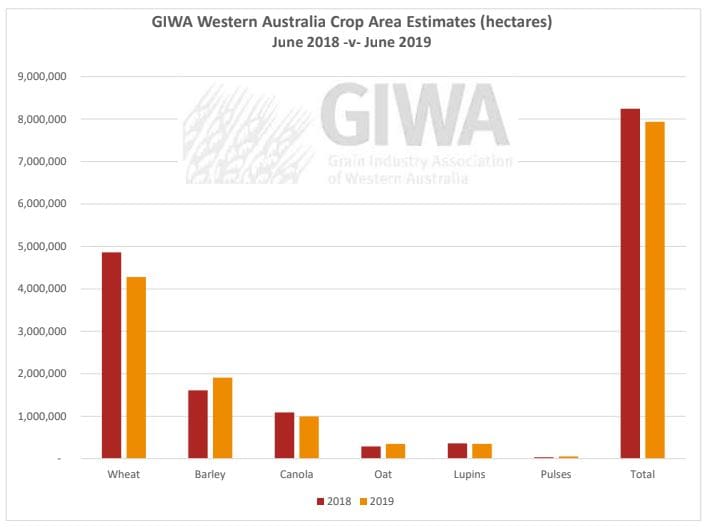 Most of WA grainbelt and eastern south coast has received below normal rainfall for the past six months.

Rain for May was well below average for most of the agricultural area and South West. Accordingly, soil moisture storage at the start of June is very low over much of the grainbelt. The WA Department of Primary Industries and Regional Development’s (DPIRD) Statistical Seasonal Forecast for June to August (Figure 1) shows a below normal rainfall outlook for much of the South West, Great Southern, and central and eastern grainbelt regions.

Over three quarters of available dynamical climate models also have a preference towards drier than normal conditions in this period, with the remainder having a neutral rainfall outlook. 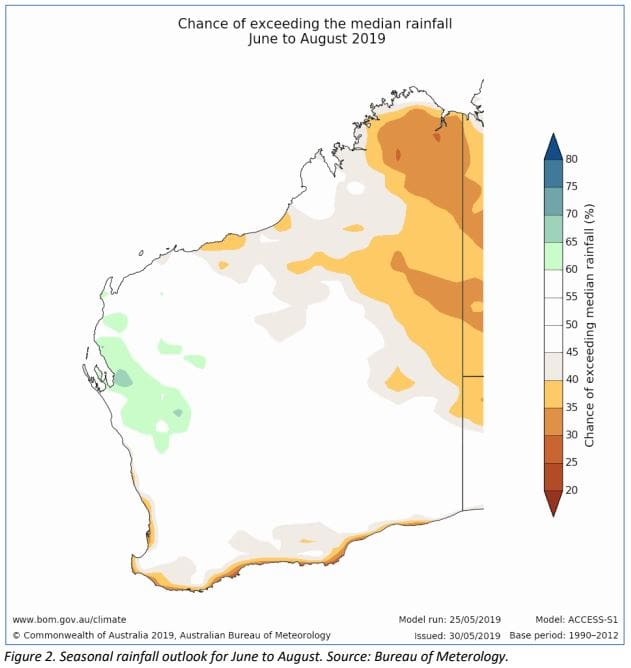 The Bureau of Meteorology’s rainfall outlook (Figure 2) is mostly neutral for southern WA.

Overall, the season still appears to be more likely drier than normal rather than wetter. However, rainfall predicted over 6th to 11th June is likely to be a good start to the growing season in many areas and offers the opportunity to build soil water storage.

Looking further ahead, most climate models are indicating drier and warmer conditions are more likely for September and October.

Normally projections at such a lead time would have lower predictive skill but this year most models are expecting a positive Indian Ocean Dipole event to develop.

Coupled with predicted higher than normal sea level pressures over southern Australia, this tends to suppress seasonal rainfall over much of Australia.