THE outlook for Western Australian grain production has improved over the last month with several good rainfall events over most regions throughout July and the first week in August.

Several rain fronts have crossed WA’s cropping zones in the past week and it is raining again today in many areas.

But the grain production outlook in those zones is still very low and unlikely to change from now on.

The remainder of the state is now on track for close to average grain yields for all crops, except for oats, with the Esperance port zone expecting above average tonnage produced for all grains, excluding oats.

GIWA Oilseeds Council chair, Michael Lamond, said while WA’s total winter crop tonnages would be down quite a bit from last year, prospects had improved in the last month.

“There has nearly been average rain for most of the southern half of the state in July. The total rainfall for the year is still quite low, but we have the subsoil moisture. Even in areas that have had only 100mm up until the last week, the crops were looking close to average because of the subsoil moisture,” he said.

“We have estimated around 1 million tonnes for the Geraldton port zone now whereas a month ago it was looking like half that. There will still be areas there and in the eastern wheatbelt that don’t harvest a crop, but that is certainly a lot less now than it was.” 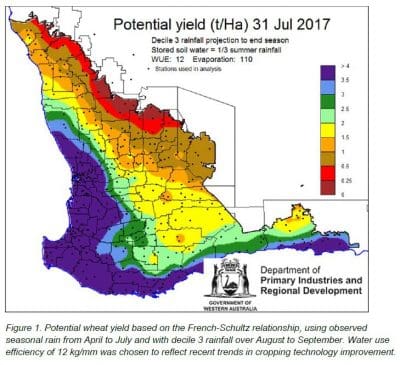 The GIWA report predicts the expected tonnage of canola and lupins will be less than half of last years’ production.

This is unlikely to change from now on as the big decrease in tonnages are from the north and east of the state where the season finishes earlier than the remainder of the grain producing areas.

For final wheat and barley tonnages to reach the estimated figures of 5.5Mt and 2.7Mt respectively, the season will need to continue with average rainfall and be cooler than in recent years during grain fill.

Across WA the expected tonnage of oats is estimated to be in the vicinity of half 2016’s production. In many areas, traditional oat growers have conservatively pared back their programs and opportunistic oat growers have not planted at all.

Ironically, the looming stockpile issue from 2016/2017 has largely evaporated due to the dry start to the season driving strong domestic demand for on farm stock feed for barley and oats.

The WA Department of Primary Industries and Regional Development suggests there is “an easing of rainfall probabilities, with improved chances of exceeding median”, which means whilst spring rains are still likely to be below average there is less chance now that this will occur.