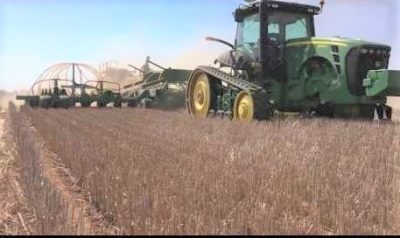 DRY conditions continue over most of the cropping regions of Western Australia where winter crop planting has all but wrapped up.

The lack of rain and projections for a low rainfall year have seen a general decrease in the intended area of plantings, mostly coming from a reduction in projected wheat acreages as canola and lupin areas were committed earlier in the season.

The barley area has increased slightly on earlier forecasts in line with a strengthening of price during the seeding period.

GIWA oilseeds council chair and crop report author, Michael Lamond, said the last rain event on May 20 was below expectations and “petered out as it went east and north”.

“It did get a fair bit of the crop that had been dry sown up and it is looking good. But in the north and eastern areas that didn’t get crop up, it is looking pretty grim,” he said.

Mr Lamond said the crops that were up were growing well with at least average or above average potential, particularly in the southern areas of the state, but the total area was down on earlier predictions.

“Lupins and canola went in as planned, although most people backed off on a paddock or two. Since the last report there was still a fair bit of wheat to go in the ground, but that hasn’t occurred,” he said.

“Most seeders have pulled up, although a few guys are saying they will hang out until the end of June and see what happens.  There is a little bit to go in still in the southern areas where it was wet or growers are spreading the seeding out for frost mitigation.”

WA Department of Agriculture and Food (DAFWA) research officer, Ian Foster, said the past few months had seen well below average rainfall across WA’s agricultural areas with much of the northern and central regions receiving less than 20 per cent of normal rain since April.

Estimated stored soil water at early June still indicates substantial water storage over large parts of the central and southern agricultural regions and continuing lower stores over much of the north and north-east.

He said the seasonal rainfall outlook for June to August 2017 was for below average rainfall over most of WA. 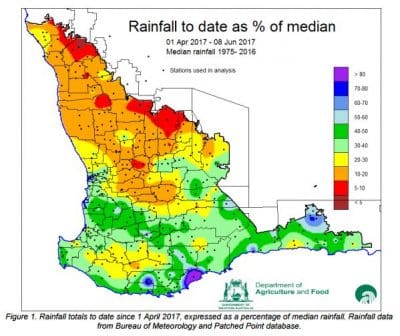 Tough going in the north

In the north, GIWA reports seeding has finished for the majority of the Geraldton port zone. Most canola that has come up is very patchy with some growers considering fallowing paddocks in the north-eastern areas if rain does not fall during the first few weeks of June.

Lupin establishment has been fairly good in some areas that received rain, with adequate plant density although most are patchy or have not germinated.

There will be a slight reduction in the predicted wheat area in the Geraldton region as most growers dropped off a paddock or two as the dry conditions continued from last month.

In the Kwinana zone, most of the Midlands have finished seeding with the exception of areas closer to the coast where it has been very dry.

Some paddocks of cereal may still go in if it rains during June. The majority of wheat, barley and oat area has gone in as planned. Sub-soil moisture ended up being too deep for growers to follow down and many crops went in dry.

Germination has been patchy in in the western edge of the Kwinana port zone but most paddocks are up or coming with reasonable plant density.

Around 70 per cent of the crops are okay with about 30pc just average and patchy.

Crops in eastern regions of the Kwinana zone continue the trend of patchy rainfall across the state.

The intended area of wheat planted could be down as much as 15pc to 20pc in the east and north-east areas of the zone due to the lack of good rains in May.

The western areas of the Albany port zone are in good shape considering the limited rainfall for this time of the year.

The crops are not as patchy as is the case in the north and east of the state and most have at least average yield potential.

Most of the southern Albany zone, except for the areas north of Ongerup, Jacup and east of Katanning, are in reasonably good shape with growers 85pc to 90pc through their seeding programs. The only crop left to go in are areas that were too wet or where there has been some spreading out of seeding dates for frost mitigation.

Most growers in the eastern Albany (Lakes Region) have finished seeding in the region.

Most of the region has moisture following the rain at the end of May, although there are some very dry pockets east of Hyden, north of Kulin and south of Lake Grace and Newdegate.

The Esperance port zone is in good shape compared with the rest of the state with most crops going into moisture and germinating fairly well.