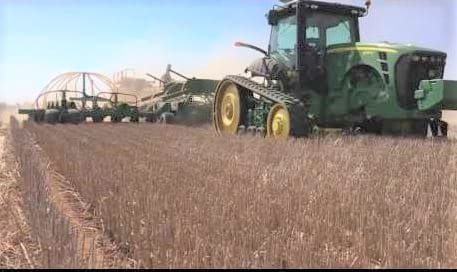 WESTERN Australian growers are taking a cautious approach to this year’s winter crop seeding, holding back from dry sowing as subsoil moisture levels remain low and forecasters point to a dry winter.

In the latest crop report from the Grain Industry Association of WA (GIWA), analysts predict the state will plant 8.169 million hectares (Mha) of winter crop this season, made up largely of 4.49Mha of wheat, 1.85Mh of barley and 1.06Mha of oats.

The estimated area is roughly similar to what went in last year.

GIWA Oilseeds Council chair and crop report author, Michael Lamond, said for the majority of the WA grainbelt there had been no useful rain so far this season and very little crop in the ground.

“The lack of sub-soil moisture and opening rains for the majority of the Western Australian grainbelt combined with climate forecasts aligning for a lower than average rainfall this year have resulted in growers making earlier than normal adjustments to their crop areas and seeding programs,” he said.

“There has been a notable reduction in the amount of dry sowing this year. Growers have opted for sowing “cleaner” paddocks first and have held off planting “dirty” paddocks with higher weed seed burdens until it rains.”

Mr Lamond said with climate forecasting models firming up, the outlook was for “an average season at best, more likely below average”.

“The confidence levels of the models are greater as you get into mid-May. The more sophisticated models are starting to come together. Over the last week they are all aligning for a drier and warmer winter,” he said.

“Whilst we could still have a spring out of the box like last year, the winter is definitely looking drier than average. There is a lot of paring back on nitrogen; a lot of the chemical isn’t going in with the pre-emergents.

“The major difference this year is the holding back. Because growers had a reasonably good last year, the profitability side of the equation is not so important, so they are prepared to wait for rain in June rather than sow dry.”

Mr Lamond said the south west and south coast regions were the only areas of the state where conditions had been favourable.

“Where it is good is the West Albany from the Great Southern Highway from Darkan south of Williams, south and west. There is subsoil moisture and the crops are up,” he said.

“The whole South Coast is good as well from Frankland, Mount Barker, Kendenup across to the Stirling Ranges south of Ongerup across to Wellstead. It drops off as you go east from Wellstead and north of the Stirlings.

“That is the only area that is good. Virtually everywhere else is dry with no subsoil moisture.”

Mr Lamond said growers hadn’t pared back their wheat planting area to fallow yet, but it wouldn’t be long before they did.

He said one of the changes this year, particularly in the southern and central areas, was that there would probably be more crop country dropped out to pasture than normal this year.

“I think what will happen this year is there will be more ‘grain and graze’ where they graze crops lightly at about the three-leaf stage (then shut them up for grain) because of the profitability of sheep, particularly south of the Great Western Highway, where they have a Merino base with a prime lamb sire. It could be as good as, if not better than, a crop,” he said.

“Whilst there hasn’t been a significant drop in paddocks yet, once we get to about May 25 it will start to really fall away.”

Mr Lamond said in the past month the intended canola area before seeding had reverted to areas similar to 2017, with 1.4Mha of canola production planned.

“This area has been adjusted down and will reduce further if no rain falls over the next two weeks,” he said.

The barley area is projected to be up from 2018, continuing the trend from previous years, due to relative profitability compared to wheat.

The likely barley area, close to 1.9Mha, will be a new record, and in some areas of the state the barley area will exceed the wheat area for the first time in history.

The wheat area could still swing significantly depending on when it rains, as country left out to fallow will mainly be intended for wheat.

There have only been small changes in lupin plantings from 2018 and the oat area is likely to be up slightly.

The pulse area continues to climb slowly with more experimental plantings in the higher rainfall regions of the State. 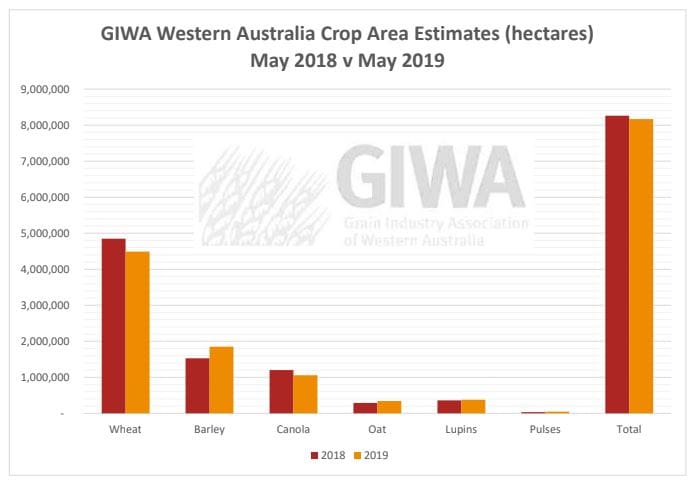