ONE of the world’s leading Russian wheat aphid (RWA) research authorities will visit South Australia next month to offer his knowledge and insights on management of the State’s newest broad acre cropping pest. Professor of Entomology in the Department of Bioagricultural Sciences and Pest Management at Colorado State University in the United States, Frank Peairs, will headline a RWA “war room” briefing at a Grains Research and Development Corporation (GRDC) Grains Research Update on February 7-8.

First detected in Australia on a property in SA’s Mid North in May 2016, RWA quickly became relatively widespread across SA and Victorian grain-growing areas and has also been detected in southern NSW.

Dr Peairs, who has extensive RWA research experience and is a widely-published author of articles on the topic, will relay the latest understandings and lessons to come out of the US where RWA is an established cropping pest.

The RWA briefing will also feature SA Research and Development Institute (SARDI) principal entomologist Greg Baker who will provide an update on the spread of RWA over the course of the 2016 cropping season and a forecast on what to expect in 2017.

Belinda Rawnsley from AgXtra will report on the most recent results from GRDC-funded trials on RWA chemical control options, while a panel discussion on RWA will also involve Maarten van Helden, a visiting scientist of integrated pest management and agro-ecology from Bordeaux Sciences Agro France, who has been assisting SARDI with RWA research activities.

GRDC Southern Regional Panel chair Keith Pengilley says RWA has been a hot topic within the SA grains industry since its detection, and the briefing at this year’s Update is likely to be of enormous interest to those attending. 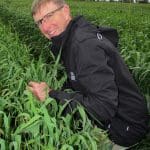 “When RWA was first discovered in Australia, we really did not know how it would behave under local conditions and what impact it would have on the cropping landscape,” Mr Pengilley said.

“We were confronted with so many unknowns at the time, but since then the GRDC, its research partners and other agencies have been working hard to develop an improved understanding of the pest’s behaviour and suitable integrated management approaches, and it will be important to relay this new knowledge to growers and their advisers ahead of the 2017 cropping season.”

RWA will be just one of many key topics to be addressed at the next month’s Update which will act as a launch pad for the coming season.

“In addition to the arrival of RWA, season 2016 presented an incredible amount of challenges but also opportunities for SA growers – the joy of producing high-yielding crops thanks to above-average growing season rainfall was tempered by low prices for cereals and weather damage in parts,” Mr Pengilley said.

“There was a lot to learn from last year, and those experiences and learnings will be factored into this year’s Adelaide Update so growers can be on the front foot should issues arise this year,”

With the theme of “adaptable systems – achieving results”, the Update will be attended by hundreds of agronomists, consultants, researchers, growers and other grains industry personnel committed to ensuring the State’s cropping sector remains profitable well into the future.

Keynote speakers on day one will include John Manners, Director of CSIRO Agriculture, who will take a look into the future of Australian agriculture, outlining what he sees as being the “next big thing” to propel primary production forward.

Opportunities and challenges for continuous cropping systems will be discussed by CSIRO senior farming systems agronomist John Kirkegaard, while Crop Protection Australia director Rohan Rainbow will address some of the key issues facing the grains industry in terms of chemical residues and grain contamination.

Relevant agronomic issues to be covered on day one include the impacts of a wet season on crop nutrition, mitigating the effects of frost, the drivers of barley yield, the effect of heat on wheat production, and extending the longevity of pre-emergent herbicides.

Other day one topics include the diseases likely to affect pulse and cereal crops in 2017, effective and practical use of precision technology, stubble management guidelines, arresting soil acidity, an update on the status of Khapra Beetle, new technology to test and analyse soils in real time in the field, and emerging research from University of Adelaide PhD students.

In addition to the RWA briefing, day two’s proceedings will feature presentations on topics such as management of Septoria tritici blotch and rust diseases, emerging problem weeds, the role of water-nitrogen interplay in determining yield potential, the effect of controlled traffic farming on nitrous oxide emissions and successful soil amelioration techniques.

Other day two topics include optimising canola yield, insights into why blackleg disease in canola was so severe in 2016, biological farming inputs, the grain market outlook, measuring soil nitrate “on the go”, maximising the nitrogen benefits of pulses, and the latest research on millipedes and slaters.

For a detailed program and to register for the event please visit www.grdc.com.au/updatedates or phone ORM on 03 5441 6176 or email [email protected].