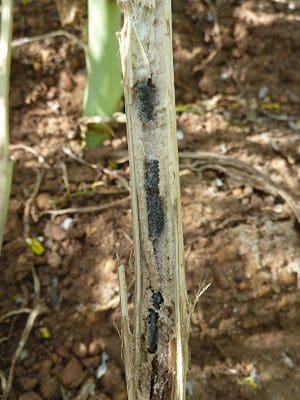 The Western Australian trials were conducted by the Centre for Crop and Disease Management (CCDM) – co-supported by Curtin University and the Grains Research and Development Corporation (GRDC) – in collaboration with the Australian Herbicide Resistance Initiative (AHRI), with GRDC investment.

Canola is a popular and profitable break crop in WA, but increased plantings have seen a rise in the incidence and severity of sclerotinia outbreaks, which significantly reduce canola crop yields.

With no genetic resistance among current varieties to the fungal pathogen that causes sclerotinia, growers are completely reliant on fungicides and crop rotations to manage the disease.

“These temperatures and durations significantly exceeded the minimum requirement to kill sclerotia of all sizes – which is 350°C maintained for 10 seconds.”

Mr Brooks said sparse canola stubble that had not been windrowed was difficult to burn and could not achieve the temperatures required to kill sclerotia.

“Previous studies raked stubble into windrows to increase residue loads, but this was also not effective, as sclerotia became dislodged from the brittle canola stems and were able to enter the soil,” he said.

Mr Brooks said narrow windrow burning, which had already been proven to kill weed seeds after harvest, provided an effective technique to kill sclerotia as part of a wider integrated disease management strategy.

AHRI research agronomist Mike Ashworth said the opportunity to intercept and kill sclerotia before it re-entered the soil to infect crops in successive years was important given it could persist in the soil for up to seven years and infect a range of broadleaf crop species, making crop rotation sometimes ineffective.

“The higher the number of sclerotia in the soil, the greater the likelihood and severity of a sclerotinia outbreak occurring and of it being severe – when weather conditions are right,” he said.

“The findings from the sclerotinia trials suggest growers might benefit from taking some of the learnings from weed research and applying them to disease management,” he said.

“This includes identifying and adopting practices that continually disrupt the population. Killing sclerotia using heat before they enter the soil is a good example of this.”

“As part of Kyran’s studies, he also carried out a survey in 2016 that looked at the position of sclerotia within the stem in both open-pollinated and hybrid canola varieties,” Dr Bennett said.

“To build on this survey, we are now carrying out field trials across WA to see if there is a difference between varieties, and to determine the optimum harvest height, regardless of season or environment.

“We hope this work will help growers make agronomy decisions about which canola variety to grow when the risk of sclerotinia infection is high.”

Mr Brooks, who is now an agronomist with Landmark, had an Agribusiness Honours Scholarship funded by the Science and Agribusiness Connect (SAC) initiative, made possible by the State Government’s Royalties for Regions program.