Soil acidity limits productivity on approximately 50 per cent of Australia’s agricultural land and several important weed species have a competitive advantage over broadacre crops on soils where the surface soil pH level is less than 5.5 or the subsurface pH is less than 4.8. 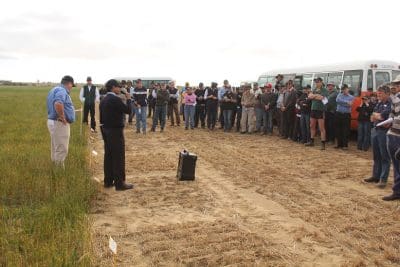 “Firstly, agricultural crops yield better when they are grown in soils where the pH is in the optimal zone and secondly, crops are better able to compete with weeds,” he said.

“Having lower weed numbers in-crop means the herbicides applied are more likely to be effective and also there is less potential for weed seed to be added to the soil’s seed bank.”

Where soil acidity was removed as a constraint to production, DAFWA researcher Chris Gazey and Precision SoilTech’s Joel Andrew measured a total biomass increase of 160pc compared to the control (un-limed) acidic profile in a trial at Kellerberrin, WA, and the weed biomass was reduced to only 3pc of the total biomass.

“It is usually several years before a lime application has a measurable effect on soil pH, especially in the subsurface,” Dr Hashem said.

“In our GRDC-funded trials at Merredin, Wongan Hills and Eradu from 2010 to 2014 with researchers from the Australian Herbicide Resistance Initiative (AHRI) at the University of Western Australia, we saw reductions in populations of wild radish, annual ryegrass and barley grass of between 40pc and 70pc in the fourth year of the trial as a result of lime applications.”

Surface pH can also impact on the breakdown processes of residual herbicides, potentially impacting future crop safety and exposing later generations of weeds to sub-lethal doses of the herbicide.

Crop competition is one of the most effective non-herbicide weed control tactics available and managing the soil’s surface and sub-surface pH is central to enhancing plant growth and productivity, giving crops the winning edge against weeds.

Short answer: Most broadacre crops are suited to soil pH above 5.5. In more acidic soils, weeds can take advantage of the soil moisture and nutrients to grow and set seed, adding to the soil weed seed bank.

Longer answer: A small shift in soil pH can have a large impact on the availability of aluminium in the soil. Soluble aluminium restricts the growth of plant roots and this limits the plant’s ability to access water and nutrients, particularly in seasons where there is a dry finish, resulting in reduced yield and smaller grain size. Weeds do not usually prefer acidic soils, they are just able to take advantage of the reduced competition for resources. By adding lime to acidic soils it is possible to lift the pH, allowing crops to perform better and out-compete the weeds.

Does soil pH affect the breakdown of residual herbicides?

Longer answer: Residual herbicides that breakdown through reactions with water (hydrolysis) are strongly affected by soil pH. Triazines (Group C sub-group) and sulfonylureas (Group B sub-group) are broken down through chemical hydrolysis in neutral or acid soils. This process is much slower in alkaline soils, potentially restricting crop choice and exposing late germinations to sub-lethal doses of the herbicide.

The other main method of residual herbicide breakdown is through microbial degradation. Soil pH generally does not affect this process, except in the case of imidazolinones (Group B sub-group), which persist for longer in acidic (low pH) soils.

Can I expect a crop yield benefit from lime application?

Short answer: Yes, if pH is currently a limiting factor then applications of lime will improve crop yield. 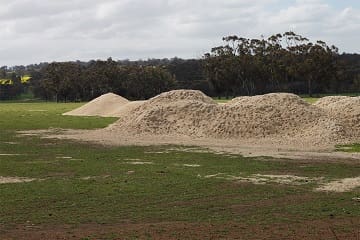 Weeds do not usually prefer acidic soils, they are just able to take advantage of the reduced competition for resources. By adding lime to acidic soils it is possible to lift the pH, allowing crops to perform better and out-compete the weeds.

Ask your questions about the affect of soil pH on weed management on the WeedSmart Innovations Facebook page WeedSmartAU, Twitter @WeedSmartAU or the WeedSmart website http://www.weedsmart.org.au/category/ask-a-weedsmart-expert/