When a herbicide is released on the market it has a fairly predictable number of uses or ‘shots’ before resistance to that mode of action begins to be evident in the weed population. 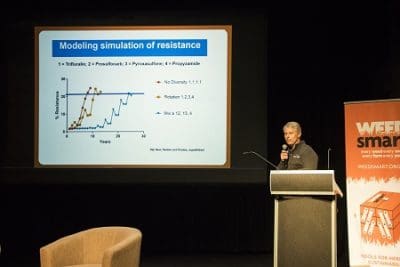 Grounded Agronomy’s Rick Rundell-Gordon speaking at WeedSmart Week 2017 in Wagga Wagga about the science behind the ‘mix and rotate’ tactic to target multiple resistance mutations in weed populations.

For example, in-field experience and computer modelling both show that repeated use of glyphosate on a weed population will evolve full-blown glyphosate resistance in approximately 15 years.

This effective lifespan ranges from around four years to over 20 years for the most commonly used herbicides, before resistance is evident.

Grounded Agronomy consultant agronomist, Rick Rundell-Gordon, Swan Hill, Victoria, said the widely-promoted and well-adopted practice of rotating between herbicide modes of action (MOA) had the beneficial effect of ‘buying time’ because if a MOA was used once every two years the lifespan of the herbicide effectively doubled.

“This means the herbicide remains a viable option for weed control for longer and the more diversity in herbicide MOAs applied, the longer the effective use is for all the herbicides in the program,” he says.

“If a nil-tolerance approach is taken to weeds that survive a herbicide application then herbicide resistance is much less likely to evolve. 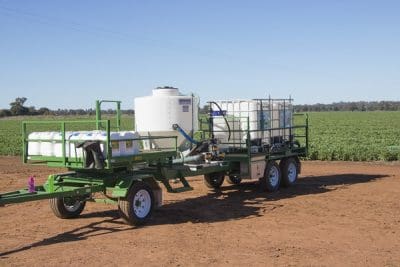 When mixing herbicide modes of action, always use full label rates and ensure all products are compatible.

“We now know that mixing two or more compatible herbicides with different modes of action can also increase the number of times an individual herbicide can be used within the herbicide program.

“Mixing works by targeting different mutations within the weed population with the one spray application.”

For example, mixing trifluralin with another pre-emergent herbicide, both at full label rates, can increase the number of ‘shots’ of both herbicides across the cropping rotation.

An important proviso is that the weed population must still have some susceptibility to all of the tank mix partners.

‘Mix and rotate MOA’ is so important it is one of the ‘Big 6’ WeedSmart strategies to manage herbicide resistance.

Short answer: Glyphosate resistance in waterhemp in the United States was less likely to occur when farmers used tank mixes.

Longer answer: Researchers from the University of Illinois, the USDA-ARS Global Change and Photosynthesis Research Unit, and the State University, New Mexico used spray records from a local spray contractor to compare 50 fields with glyphosate resistant waterhemp and 50 fields without. They looked at a total of 61 management and environmental variables and found that mixing herbicides was the single management strategy that made the most difference to whether or not glyphosate resistant waterhemp became a problem in any field.

In a review of herbicide application records from 2004 to 2006 and glyphosate resistance tests in 2010, the researchers found that adding more products to the tank at full rates for a single application causes the probability of resistance in these fields to decline sharply.

AHRI’s Peter Newman said the evidence was mounting that ‘mixing and rotating herbicide MOAs buys you time and shots’.

Is there any research to suggest mixing pre-emergent herbicides could be effective?

Short answer: Computer modelling has demonstrated that the onset of herbicide resistance can be delayed when a mix and rotate strategy is used with pre-emergent herbicides to control annual ryegrass.

Longer answer: Based on research from the Australian Herbicide Resistance Initiative, the best advice to growers and agronomists is to rotate between these three groups of pre-emergent herbicides –

Full label rates must be applied.

Is mixing and rotating herbicides all I need to do?

Short answer: No. Mixing and rotating herbicide modes of action can effectively lengthen the ‘life’ of a herbicide MOA on your farm but it will not prevent resistance on its own.

Longer answer: In addition to carefully selecting and managing herbicides it is necessary to also implement as many cultural (non-herbicide) tactics into your weed control program as possible. The overall aim of a sustainable weed management program is to use as many tactics as possible to keep weed numbers low, prevent weed seed set and remove all survivors.

Ask your questions about mixing herbicide modes of action across the cropping program on the WeedSmart Innovations Facebook page WeedSmartAU, Twitter @WeedSmartAU or the WeedSmart website http://www.weedsmart.org.au/category/ask-a-weedsmart-expert/

Source: ‘WeedSmart’ is an industry-led initiative that aims to enhance on-farm practices and promote the long term, sustainable use of herbicides in Australian agriculture.