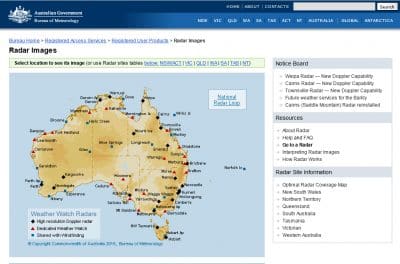 The radar is the first of three to be installed by the Western Australian Department of Agriculture and Food (DAFWA) in partnership with the Bureau of Meteorology.

Radars at South Doodlakine and Watheroo are expected to be operational mid-2017. This will broaden Doppler radar coverage across the grainbelt as part of the project made possible by Royalties for Regions investment.

The images, which include a ‘live’ rainfall intensity map, a map of wind speed towards or away the radar and a range of rainfall accumulations, are updated on the Bureau of Meteorology’s website every six minutes. 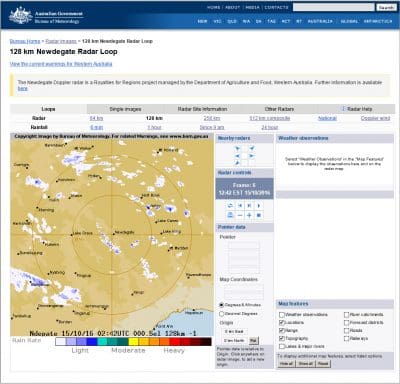 “Landholders will be able to combine this real time information with data from the department’s network of 129 weather stations across the grainbelt to make more informed decisions about, for example, time of sowing, fertiliser and chemical applications and moving livestock,” Mr Connell said.

“The radar information will also be a valuable addition to aviation safety and emergency services, which will now have more comprehensive information to better detect weather threats and improve responses.”

Doppler radar works by sending pulses of electromagnetic waves, which are reflected back to the radar by objects in their path, such as rainfall or dust.

The strength of the signal that the radar observes is related to the number and size of the raindrops that are illuminated in the radar beam.

The Bureau has developed sophisticated software to convert these signals into an estimate of rainfall intensity and wind speeds. 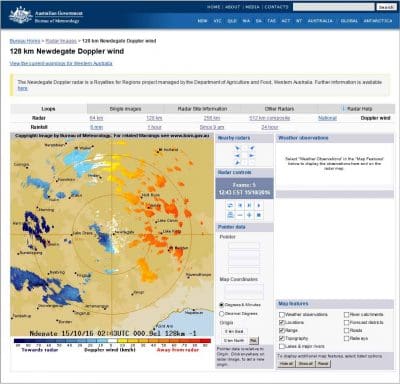 The rainfall maps for the Newdegate radar are calibrated in real-time using data from the network of automatic weather stations operated by the department.

The installation of the three new Doppler radar towers will complement the Bureau’s existing network of five weather radars that service the grainbelt, including Geraldton, Perth, Kalgoorlie, Esperance and Albany.

“This investment by the Western Australian Government will significantly enhance the service provided by the Bureau to the rural and regional community,” Mr Reader said.

“Residents and businesses from Northampton to Esperance and nearly all points in-between will soon have access to this valuable, real-time wind and rainfall information.

“This data will also value-add to the weather forecasting and warning systems, which will assist both farmers, as well as community services.”

The department is also working to integrate the information from Doppler radars into new digital information tools, as part of its e-Connected Grainbelt Royalties for Regions project.

To view the Doppler radar images from Newdegate and other locations visit bom.gov.au and click on ‘radar’.

DAFWA’s weather station data can be accessed for free by visiting agric.wa.gov.au and clicking on ‘weather stations’ on the homepage.