THE wet season of 2016 will have favoured the multiplication of many soil-borne pathogens, with experts recommending that any growers contemplating growing wheat in paddocks following cereals or grassy pastures to consider using PreDicta B® testing. If this shows there is a soil-borne disease risk, then they should consult their advisor about options to minimise the risk in 2017.

Dr McKay said early results from PreDicta B® testing indicated take-all levels had increased on last year and could be among the highest levels seen for some time.

“The risk from take-all will be greatest for wheat following grassy pastures or other cereal,” Dr McKay said.

“Summer rainfall will have reduced in the risk of take-all in some areas. How much the risk has reduced will depend on how long the soil remained moist to allow microbial activity to break down infected roots and crowns.

“This will vary with the amounts of rainfall, soil type and summer weed control. If growers are planning to sow wheat following grassy pastures or a cereal crop we recommend getting the paddock checked by PreDicta B®.

“PreDicta B® will identify the potential disease, what actually develops in crop will depend on measures taken by growers to reduce the risk and seasonal conditions. If we have a wet winter/early spring followed by a dry finish then there is the potential for take-all to cause losses up to 30-40 per cent.

“In 2015 we had a high-risk situation with take-all but it didn’t express because of the dry season.”

Other results from PreDicta B® testing are showing the risk for crown rot and rhizoctonia is down slightly on previous years but remains significant.

Dr McKay said white heads associated with crown rot were less common in 2016 due to the wet spring. However, the large crop stubbles meant there would be a lot of inoculum produced. 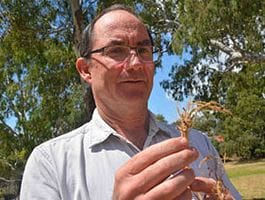 “Some growers may be contemplating burning to reduce the risk in some paddocks, but they need to be aware that burning will not remove the crowns which will also be infected,” he said.

In paddocks with high risk of take-all or crown rot growers should aim to plant non-cereal crops such as pulses, oilseeds, or grass-free pastures to help reduce inoculum levels.

“If that is not an option, growers could consider barley or oats as they will have much less yield loss than wheat,” he said.

If take-all levels are low to medium, and wheat is to be grown, then growers should consider a fungicide seed or fertiliser treatment registered to suppress or control take-all, keep paddocks weed free over summer and autumn, sow affected paddocks towards the end of the sowing program and sow between the rows of the last cereal crop.

Where PreDicta B® testing shows a risk of crown rot, growers who still want to grow cereals should then choose the least susceptible of the best adapted varieties. At $235 per paddock, PreDicta B® is a low-cost option compared to the potential yield losses, especially considering there are few, if any, control options once the crop is sown.

“Testing at-risk paddocks allows growers to make an informed decision on their rotations and other pre-sowing options to reduce the risk of losses,” Dr McKay said.

“Examining the stubble for stem browning can be useful for determining the risk of crown rot next season, but for most other soil-borne diseases submitting soil samples to PreDicta B® is the best way to determine which pathogens pose the greatest risk to crops to be sown in 2017.”

The sampling methodology is critical to ensure results are reliable. Dr McKay said the most important factors were to use an appropriate soil sampling tool and add a representative sample of the stubble.

“Growers in south-eastern Australia should sample to 10 centimetres with a 1cm probe,” he said. “Consultants who participate in PreDicta B® training are now provided with an appropriate device so growers should ensure their consultant is using the right tool.

“It is also very important that the samples are collected from the right places.

“Select the most important production zone within the paddock to sample; production zones are often driven by soil type. Samples should be collected from 15 locations within this zone, at each location collect three soil cores from along the rows of the previous cereal crop and add one piece of stubble about 5 cm long from the crown of a previous cereal plant or grass weed.

“If durum is to be sown in the paddock, then add two pieces of stubble to from each location to the sample.”

Production zones can have different spectrum of soil-borne diseases, so it’s best to select the zone that represents the most important soil type in the paddock, rather than attempting to average over a range of soil types.

Samples are processed weekly, from January until sowing. Results for all PreDicta B® samples that arrive at SARDI by close of business each Monday are reported on the following Friday.

While take-all and crown rot present the highest risks for 2017, growers should also be aware of other soil-borne disease risks including root lesion nematode (RLN), cereal cyst nematode (CCN) and Rhizoctonia.

Dr McKay said that while RLN levels plummeted during the millennium drought, levels had been gradually rising ever since. Conditions during spring 2016 had probably been very conducive for RLN multiplication.

“RLN doesn’t often show distinctive symptoms, so without PreDicta B® testing, growers may simply think they are seeing an under-performing crop,” he said.

“The disease reduces tillering and overall vigour and can reduce yields by about 15 per cent in cereals.”

CCN levels are generally under control, however it can still be a problem where growers have grown too many susceptible varieties in the rotation.

Trials from 2011 to 2013 showed that if CCN populations are allowed to increase losses can be up to 40pc in wheat.

Rhizoctonia levels following the wet spring are not expected to be as high as usual, however it is expected the disease will still cause problems in the low to medium-rainfall regions next year.

The risk will be greater if the summer months are dry and conditions during crop establishment are not conducive for rapid early growth of the root system down the soil profile.