Cotton ginning is expected to be in full swing in the coming months. Photo: IREC

WITH La Niña making its mark on south-eastern cropping regions, some of the shine has come off what was predicted to be Australia’s second biggest cotton seasons but, thanks to large crops and high cotton prices, most growers aren’t complaining.

In addition to causing minor crop damage in some districts, recent rain and cooler conditions has also resulted in delays to picking and start-ups at some gins.

It is expected delays will only be between a few days and a few weeks, depending on the growing region.

One of the worst hit areas is the Darling Downs in southern Queensland, which has seen two high rainfall and localised flooding events in the recent weeks.

“It was shaping up to be pretty big, but lately it has been quite cold and wet, which is not ideal,” Mr Walton said.

“I still think it is going to be a reasonable year; I don’t think there are going to be too many people who have had a complete wipe-out, or who are going to lose 70 per cent of their crop.”

He said most Downs growers are not expected to begin picking until May.

A self-described “glass half full kind of bloke”, Mr Walton said there were some positives to come out of the season.

He said the rainfall, coupled with high cotton prices, currently sitting over $800 a bale, prompted some retired dryland growers to try their luck this season.

He said this contributed to a larger overall crop size in the region.

Mr Walton said the rainfall will also set up growers for a decent winter crop, as well as for the next cotton season.

“Most people in the area have their dams full and things look good for the upcoming winter season and next cotton season; you have to look at the positives.”

The on-farm conditions have meant gins in the district will be opening slightly later than usual.

Queensland Cotton owned gins on the Downs are expected to be three or four weeks late, commencing operations in the last week of April for Dalby and early May for Cecil Plains.

It is anticipated that the LDC Dalby site will start accepting cotton slightly earlier in the next week or two.

However, with less flooding in the growing regions, NSW growers are expected to see higher quality and a larger crop overall compared to their Queensland counterparts.

Moree farmer and Gwydir Valley Cotton Growers’ Association chair, Mick Humphries, said it is expected to be one of the largest crops on record for his region.

“It’s nowhere near a record but it’s a very good number.

“The only thing that has held back the area this year is that it is so wet.

“The conditions may delay things and there may be some damage to the earlier crops, but, provided we get some nice weather in the coming weeks, the season should still be very good.”

Gins in northern NSW are predicted to push back operations to align with growers.

Namoi Cotton, which has nine of its ten gins in NSW, is expecting delays of between 7 to 10 days with ginning anticipated to commence from mid-April to early May. 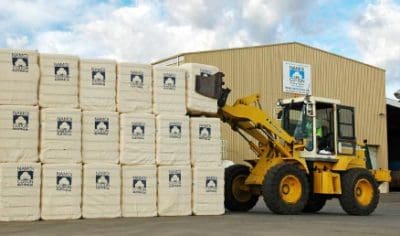 Unlike recent seasons, all the Namoi sites will be running this year with staff in place to operate most sites 24 hours a day.

The three Queensland Cotton NSW gins have also had their schedules pushed back, with a late April or May start date.

Likewise, the AusCott gins in Wee Waa, Trangie, Hay and Warren will be delayed by about 10 days with ginning to run from late April or early May through to September or October.

The RivCott site at Carrathool in southern NSW will also commence operations in early May, a delay of only a few days.

RivCott chief executive officer Sam Buster said the push-back in ginning is not a major concern.

“The start date is only a little bit delayed by about a few days,” Mr Buster said.

“Growers had a good, timely start to the planting.

“They planted about the first of October but then we had a very cold spring which led to a 20pc to 30pc replant and delay in early growth.

“That has been followed with a very nice summer.”

Mr Buster said he is expecting a crop which returns to volumes seen in pre-drought seasons.

“It’s a happy return to normal and we are excited for that.”

RainAg director Ian Grellman said delayed gin opens may impact cotton prices, depending on how close the local production gets to the Northern Hemisphere season.

He said currently cotton prices are very high at about $830 per bale.

“It is an unusual season because you’ve got extremely high prices, but there is over $100 difference between early bales and the later bales in the season,” Mr Grellman said.

He said the size of the crop, which is tipped to be the second largest on record, could also add to the timing pressures and create further delays.

“The more bales there are, the longer it takes.

“A grower might harvest in May or June, but he may not have his bales go to market until October or November, depending on the congestion at the gin.”

Mr Grellman said, with about 70pc of the world’s production coming out of the Northern  hemisphere, Australian growers need to ensure they don’t conflict with cotton from the northern harvest, which runs from October to December.

He said it is the over-lap with Northern Hemisphere cotton that creates the $100 price reduction for Australian bales.

Cotton Australia has forecasted that the upcoming cotton crop could be as large as  5.2 million bales.