GRAIN growers are encouraged to implement strategies to avoid snail contamination of grain this harvest. 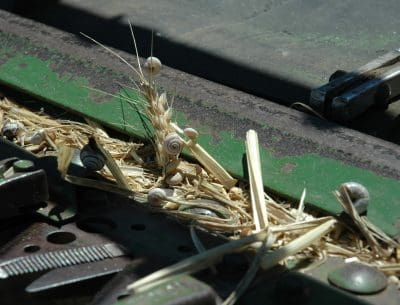 At harvest, snails present in the crop canopy (or windrows) above cutting height can often enter the header, clogging machinery and/or leading to downgraded grain quality.

SARDI entomologist, Bill Kimber, whose work is supported by the Grains Research and Development Corporation (GRDC), said snails presented above cutting height in the canopy or in windrows could enter the header during harvest, potentially leading to clogging of machinery and grain quality downgrades.

“Closely monitoring snail populations ahead of harvest is recommended so growers can determine the need for measures, such as header modifications, to reduce the risk of contamination,” Mr Kimber said.

Tactics for minimising snail contamination of grain at harvest include:

Growers are reminded that the common white snail (Cernuella virgata) is a prohibited pest in important export markets, therefore it is vital that grain is delivered free of snails to maintain market access.

“It is important to control summer weeds to remove refuges before undertaking other cultural control methods,” he said.

“Bashing stubble on hot days (above 35°C) will dehydrate and kill some snails. Burning in autumn can achieve high snail mortality but this should be balanced against the risk of erosion.

“Burning only chaff rows reduces the risk of erosion and snails are attracted to moisture under these windrows. Instead of spreading chaff and straw at harvest, consider burning these as autumn conditions allow as part of a snail control program. Baiting before egg lay in late summer/early autumn is critical.”

The GRDC has published a Snail Management Fact Sheet which can be viewed and downloaded via www.grdc.com.au/GRDC-FS-SnailManagement. It provides information on minimising contamination at harvest as part of a year-round approach to controlling snails.

More information on harvest techniques and integrated snail management is contained in the GRDC publication Bash ’em, Burn ’em, Bait ’em which is available for viewing and download via www.grdc.com.au/GRDC-Snails-BashBurnBait.

Meanwhile, grains industry leaders in SA have formed a working group to highlight the importance of continued grain hygiene to Keep Our Grain Clean to enable continued access to international and domestic markets.

More information on grain quality and hygiene requirements are available through the GRDC, Viterra, PIRSA and other sources online at www.pir.sa.gov.au/cleangrain.