What do the best sorghum growers do differently?

IN 2014, with support from CSIRO and the Grains Research and Development Corporation (GRDC) as part of the project “Higher yielding wheat and sorghum for the Northern Region (UQ00074)”, researchers collected data from 75 sorghum crops grown over the last four years on farmers’ fields on the Darling Downs in southern Queensland.

Average yield in the lowest 50 per cent of fields was 3882 kilograms/hectare.

So, the objective of this study was to understand what was the role of management in explaining such a variability.

To answer the question, we used classification methods to identify the main variables that linked field performance, in terms of water use efficiency, yield and gross margin and management.

The results showed that sowing date was the most important factor in determining sorghum performance.

Most northern growers understand that sorghum can be sown once soil temperatures reach 16° Celsius.

We looked at historical data from Dalby provided by the Bureau of Meteorology and found this temperature is typically reached by the 4th of September.

Our analysis of frost risk at all farm sites from the study indicated little to no risk of frost occurrence after the six-leaf stage even when sowing in September.

These results suggest early sowing could be a viable option for farmers receiving those early rains, and that earlier sowing would greatly increase their chances of higher WUE, yield and profit. 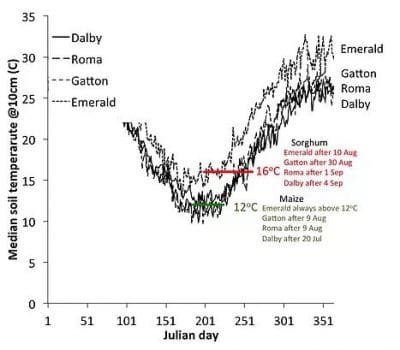 Figure 1:  Median soil temperature data from the Australian Bureau of Meteorology at various sites in Queensland with lines indicating minimum required temperatures for sowing maize and sorghum and dates for these temperatures at each site.

Given higher N fertiliser was such an important driver of higher yield, we looked at why some farmers weren’t applying much N to their fields.

We found that high debt levels, from our data this is above $1525/ha, were associated with lower levels of investment in N, leading to poorer yields and lower gross margins.

In summary, best performing fields were sown early, farmers used higher levels of N, and were found on farms having lower levels of farm debt.

These factors alone won’t guarantee success, but they appear to be the key difference between higher and lower performing fields across the Darling Downs in Queensland.