What to do with low-yield-potential crops?

AS dry conditions continue to impact on crops in many regions of Australia, affected growers will be faced with difficult decisions that will have long lasting effects on the weed seed bank. 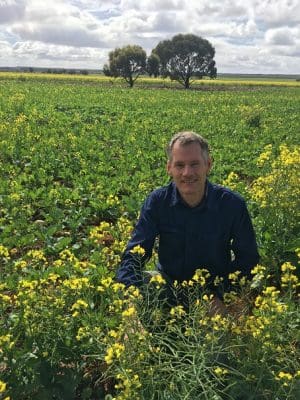 The lack of crop competition in drought-affected crops leaves the door wide open for more weeds to germinate and set seed, adding to weed control costs in future years.

Faced with a similar situation in 2001, and again in 2006, Western Australia grower, Glenn Thomas, North Tenindewa, made the hard decision to sacrifice his low yield potential lupin crops to escape the consequences of an inevitable blowout in annual ryegrass and brome grass.

“In 2001 we had a paddock with a very poor lupin crop and about 140 ryegrass plants per square metre,” he said.

“In that August we decided to spray the crop out using a glyphosate mix, leaving the best part of the paddock for comparison, and in the hope of late rains that might save the crop. Although we lost the value of a 250kg/ha lupin crop, we measured a 700kg/ha yield increase in the 2002 wheat crop as a result of fewer weeds, more nitrogen and more soil moisture. This was particularly pleasing given that 2002 was also a drought year in this district.”

The un-sprayed section was still managed with selective herbicides to control weeds in-crop, however this section of the paddock stayed weedy for six or seven years, while the sprayed out area had no weeds, clearly illustrating how much Mr Thomas had saved in chemical and operating costs in the area he had sprayed out.

When the same scenario played out in the 2006 season he again decided to spray out the low yielding lupin crop in the same paddock to avoid a build-up of weeds.

This time he sprayed out the whole paddock, being more confident in the long-term benefit of this decision. 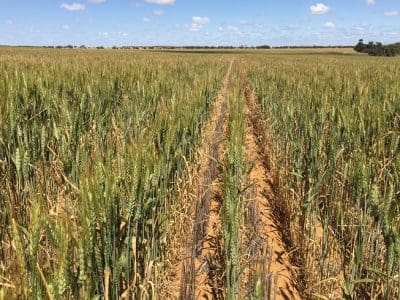 Photo from 2016 showing how clean a sprayed out paddock has remained, 10 years after the last drought-affected crop was sprayed out.

In both 2001 and 2006 the drought conditions did not improve as the year progressed so Mr Thomas had no reason to regret his decisions to forego the crop and spend the $25–30 per ha to spray out the failed crops and reset the weed seedbank.

In the end, his decision has created a legacy of very clean paddocks and he has taken a diverse approach to his weed management program including narrow windrow burning, chemical fallow and brown manuring in weedy paddocks.

His experience was also demonstrated in a four-year trial at Mingenew conducted by AHRI communication lead, Peter Newman, while working for DAFWA.

“In this trial we sprayed out a weedy lupin crop and compared this to harvesting the lupin crop and returning ryegrass seeds to the seed bank,” he said.

This trial ran for four years and the difference in ryegrass seed bank was evident for the duration of the trial.

“Although a full spray out now might provide the best outcome for weed control, it is still an expense. While there is no cash flow into the business, there is also no further expense with harvesting a low yielding crop where grain losses can also be high, particularly in short pulse crops,” he said.

“Another option is to crop top in October, which will still reduce seed set while preserving some cash flow from this year’s crop. Implementing a harvest weed seed control tactic such as chaff lining or using a chaff cart will further reduce the risk of a future weed blowout from a low rainfall year.”

Other advantages of crop topping over an earlier spray out is that paraquat is a lower cost herbicide application and there will be more ground cover left to protect the soil surface from the wind over summer.

“Although crop topping these paddocks in October will not necessarily achieve as good a result as spraying the paddock out in August, it is a lot better than simply harvesting the crop and returning weed seeds to the seed bank,” Mr Newman said.

As the current season unfolds Mr Thomas is once again looking at weed numbers in low yielding crops.

He reckons there will be a percentage of his lupin crop that will be sprayed out along with a small area of canola where wild radish numbers are of concern.

“This year we probably won’t actually spray crops out until later in the season when we have grown as much biomass as possible,” he said.

“In 2001 and 2006 the season started well but then deteriorated so the weeds grew with the crop and needed to be sprayed in August when it was clear the crops could not compete with the weeds. This year, the dry start has kept weed numbers relatively low and we are only just seeing a response to the couple of double-digit rainfall events from the last week or two.”

Mr Thomas is now watching the weeds respond to the rain and will monitor them carefully so he can prevent seed set while still maximising biomass and nitrogen production in the lupins.

He is also watching his wheat crops that have already come to head and the weeds are growing but it’s too late for in-crop herbicide applications.

“This is a real dilemma for us and others in the district,” he said. “There might be a case for a pre-harvest herbicide application in these wheat crops to target late germinating weeds but there is a lot to consider before making this decision.”