What triggered the Rutherglen bug invasion this summer?

JUST what caused the virtual plague of Rutherglen bugs that invaded northern cropping areas in unprecedented numbers over summer has had scientists searching for answers. 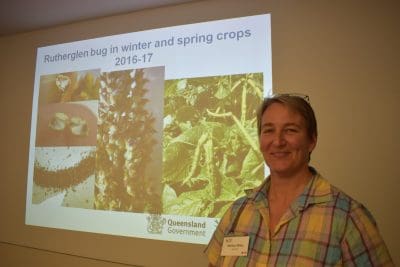 Dr Melina Miles said rainfall over winter enabled Rutherglen bugs to breed up on the abundant hosts that were around.

They suspect it probably has something to do with the ideal seasonal conditions of last winter and a changing pattern of weed hosts in today’s modern farming systems.

Queensland Department of Agriculture and Fisheries (QDAF) entomologist, Melina Miles, told this week’s GRDC Research Update in Goondiwindi that Rutherglen bug (RGB) numbers over summer were higher than anyone had ever seen and they persisted longer than ever.

Adding to the conundrum, they not only targeted their favourite crops – sorghum and sunflowers – but extended their assault into a string of other summer crops that they usually left alone.

“Normally they are just a pest of sorghum and sunflowers, but this year the sheer numbers made them a pest of everything and, for the first time, a major issue in crops like mungbeans and cotton as well,” she said.

“Everybody was complaining about Rutherglen bugs. For a while there, Twitter was just alive with complaints about how pesky they were. It hasn’t yet abated entirely.”

So why has it been such a massive year for Rutherglen bugs?

Dr Miles said 30 years ago Rutherglen bugs were considered a migratory species that bred up outside the cropping zone and were blown into easterly cropping areas in spring. 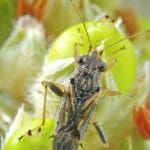 “That is why if you had spring sunflowers you would get one or more influxes, then that was pretty much the end of it. But, this year it was very different,” she said.

“My impression is that this time the rainfall over winter enabled Rutherglen bugs to breed up on the abundant hosts that were around.

“The other thing that has changed over the last 20 to 30 years is the weeds we now have in our farming systems. The brassica weeds and fleabane are much more apparent than they used to be. They are excellent hosts for Rutherglen bugs.

“I am convinced that has contributed dramatically to the persistent patterns of movement into the crop we have seen compared to previous years.”

Dr Miles said while the potential for the pests to damage sorghum and sunflowers was well known, it was not so well understood what damage they could do to other crops.

“We know they are primarily seed feeders. They are well known for affecting seed weight because their feeding activity prevents the seed from filling. They have a really big impact on germination,” she said.

Dr Miles said one of the challenges for growers this year was the difficulty of achieving effective control over the pest with insecticide sprays.

“There was a lot of synthetic pyrethroid that went out against Rutherglen bug that really only seemed to hold them for a day or two,” she said.

“We have spent quite a bit of time this summer screening products, looking at how effective they were as knock-downs and in terms of their residual efficacy.

“Pretty much everything worked well as a knock-down. Then we started to look at the residual. What we started to see was something we didn’t expect. For a product like alpha-cypermethrin, even after three days we saw quite a dramatic drop in its efficacy. By seven days, it was effectively non-effective.

“This helps explain why many fields treated with alphacypermethrin were still infested, or quickly reinfested, after treatment.”

“Rutherglen bugs breed up in canola and absolutely millions of them come marauding out of canola stubbles and move into the summer crops,” she said.

“They attack the first eight to 12 rows of the summer crop, whether it is cotton, soybeans, or sorghum. Sometimes four or five sprays won’t stop them from doing damage or killing the seedlings.”

Ms Miles said scientists were working to better understand the issues of managing Rutherglen bugs and hoped to come up with solutions. 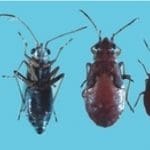 “The first area of research is to see if there is some way of managing Rutherglen bugs and prevent them from laying in the canola crops,” she said.

“The second is to control them in the canola stubble before they start to move out. The movement seems to be coordinated with the drying down of the stubbles. Things like diatomaceous earth that is potentially less disruptive than other insecticide options might be useful.

“The third approach is to see if we might be able to put a trap crop between the canola stubbles and the summer crop. We know RGB slow down when they hit the crop and don’t tend to keep moving.

“A trap, in combination with seed treatment has the potential to significantly reduce the number of RGB actually reaching the summer crop. The trap could be ploughed out when the RGB movement ceases.”