Annual ryegrass is becoming increasingly prevalent in the northern cropping region, and many populations already have a high level of resistance to the major Group B and Group A herbicides registered for use in chickpea crops.

To keep this important crop as a viable option, growers are looking for ways to add non-chemical in-crop options to an integrated weed control program to prevent a yield-limiting blow-out in ryegrass populations.

The principles of crop competition are fairly well known but making the necessary changes to planting gear can be daunting, so it is important to know that any changes will achieve the desired effect.

To assist growers to better implement crop competition in chickpeas, Associate Professor Bhagirath Chauhan, principal research fellow and weed team leader, QAAFI, UQ looked at the effect of narrow rows, variety and early weed control to assess which is the most powerful suppressant of annual ryegrass.

“In a weed-free environment, it has been shown that narrow-sown chickpeas will produce higher yield, so we wanted to see if narrow sowing also suppresses weed growth and seed set,” he said.

“We also wanted to understand whether a more-prostrate variety like PBA Seamer would suppress more weeds than the more-erect PBA HatTrick. The third aspect we considered was the effect of weed infestation at different growth stages of the crop.”

The results were pretty conclusive: PBA Seamer sown at 25-centimetre row spacings and kept weed-free for at least the first three weeks after planting is a winning combination for ryegrass control. 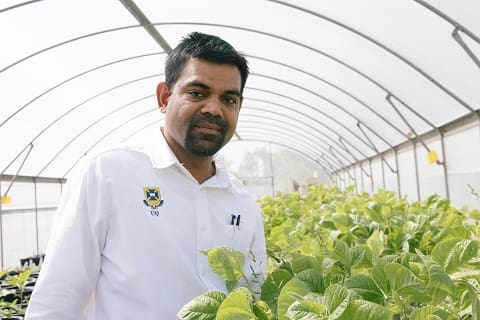 What is the best way to reduce ryegrass growth and seed set?

Short answer: Narrowing the row spacing and ensuring good early weed control are the most effective tactics in chickpeas.

Longer answer: Plant architecture made some difference, but only in very weedy conditions. Narrowing row spacing from 75cm to 25cm reduced weed biomass by 16 per cent and reduced seed set by 26pc.

Keeping the crop weed-free for at least three weeks had the biggest effect, driving down weed biomass at the end of the season by 52pc and weed seed set by 48pc. This shows that, once established, chickpea can hold its own against weeds that emerge later in the season.

Short answer: Yes. If you can’t do narrower rows then put an emphasis on early weed control.

Longer answer: Averaged across both cultivars and all weed infestation periods, sowing chickpeas on 25cm row spacing (same seeding rate) produced 20pc more grain than sowing on 75cm row spacing. This is most likely due to the crop plants being more evenly spaced and able to better exploit the available soil and light resources.

This research was conducted across two growing seasons and demonstrated that controlling annual ryegrass for the first three weeks after planting increased crop yield by a whopping 200 per cent compared to the season-long weedy scenario.

Annual ryegrass that emerges six weeks or more after planting does not impact on chickpea yield, but if allowed to set seed, can contribute to the weed seed bank present at seeding the following year.

Is annual ryegrass a serious weed in chickpea?

Short answer: Yes, annual ryegrass is a yield limiting weed and is adapting to farming systems further north than its traditional range.

By planting PBA Seamer at 25cm row spacing and keeping the crop weed-free for three weeks, the number of annual ryegrass spikes is reduced to just eight per m2.

How can I achieve this early weed control?

Short answer: Start the year ahead in the paddocks you plan to grow chickpeas and do everything possible to reduce the ryegrass seed bank using effective herbicides, weed seed burial, competitive cereals and harvest weed seed control tactics or hay-making. Back this up with registered pre-emergents for chickpea and as many non-herbicide tactics in-crop as possible.

Longer answer: Annual ryegrass is a master at evolving herbicide resistance. In southern regions it has evolved resistance to the registered in-crop herbicides for chickpeas. This will also occur in the northern region if steps are not taken to preserve the efficacy of Group A post-emergent chemistry across the crop sequence.