PRE-EMERGENT herbicides are a valuable tool to underpin crop competition and suppress weed seed production in-crop, but when growers also want to harness the power of retained stubble they often run into a sticking point where pre-emergent herbicide efficacy is compromised.

Most growers and advisers are aware that products such as trifluralin are quite tightly bound if they contact stubble during application, however AHRI research associate Dr Yaseen Khalil has been working to shed light on the behaviour of the newer pre-emergent herbicides and how to use them in no-till, stubble retention farming systems. 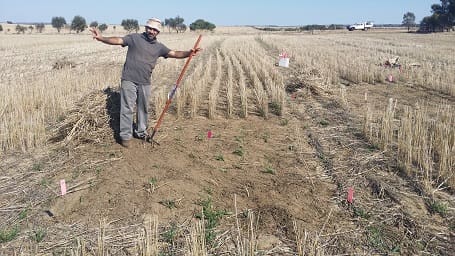 To be effective, pre-emergent herbicide must be placed in contact with the soil and an even layer of the chemical is required to intercept germinating weeds.

In his latest research Yaseen has shown that ground cover is more important than crop residue type or age when it comes to intercepting pre-emergent herbicides.

Yaseen’s previous work had looked at the behaviour of prosulfocarb (Arcade/Countdown), pyroxasulfone (Sakura), and trifluralin (Treflan) on wheat stubble. In this new research he has set his sights on finding out if other crop residues (barley, canola, chickpea and lupin) behaved differently to wheat stubble and if the age of the residue had an impact on the interception and subsequent leaching of the three herbicides from the crop residue into the soil.

For the same mass of residue, barley and wheat intercepted more herbicide than canola, chickpea or lupin residue. The effect of residue age on herbicide interception and leaching was relatively small and variable.

It makes sense that the higher the ground cover percentage, the greater the extent of herbicide interception by the stubble. Yaseen found that the mass (amount), type and age of the residue are far less important than the level of ground cover at application.

A key factor when using herbicides with high levels of crop residue is to ensure that sufficiently high rates of the chemical are used along with high carrier/spray volumes, as shown by Catherine Borger and Glenn Riethmuller. These researchers found that increasing the carrier volume from 30 to 150 litres/hectare improved the average control of ryegrass by trifluralin and Sakura from 53pc to 78pc.

Cutting wheat crops high, leaves less crop residue on the soil surface and this improves spray coverage of the soil and herbicide efficacy.

The higher the biomass of the crop the greater the benefit of cutting high. Yaseen found that as the amount of horizontal wheat residue increased from 0 t/ha (i.e. all residue standing to a harvest height of 30cm) to 4t/ha (i.e. harvested at ground level and all residue laying horizontally on the ground), less Sakura reached the soil surface. With all the wheat residue standing, spray coverage on the soil was 14.6pc compared to 7.5pc coverage when the 4t/ha stubble load was laying on the soil surface.

When 1t/ha wheat stubble is laid horizontally on the soil surface, the spray coverage of the soil was 10pc. When the 1t/ha stubble load was left standing, an extra 5pc of the herbicide spray is deposited onto the soil surface.

Increasing harvest height is a practical way to reduce ground cover of the soil while maintaining high levels of stubble in the field. This may assist with spray coverage BUT if you are doing harvest weed seed control, lower harvest height is usually required to capture the weed seed present. Another consideration is the speed of the boomspray – faster spraying speeds generates more horizontal droplets leading to increased deposition on standing stubble.

Mix and rotate according to ground cover

For example, plan to use Sakura after bulky cereal crops and rotate to other pre-emergent herbicide options in situations where there is less stubble covering the soil surface. If there is rain expected within a week it may be possible to use Arcade, or trifluralin if incorporation by sowing is an option, to avoid over-use of Sakura. Rainfall after application of pre-emergent herbicide increased herbicide efficacy for all residue amounts. Where possible, avoid applying pre-emergent herbicides to wet stubble. We first reported on Yaseen’s research in AHRI INSIGHT ‘Herbicides and stubble – some wash off, some don’t’ (April 2017) where he compared pyroxasulfone (Sakura), trifluralin (Treflan) and prosulfocarb (Arcade) herbicides by spraying them onto wheat stubble then trying a whole range of techniques to wash the herbicides off the crop residue with simulated rainfall. [Link to https://ahri.uwa.edu.au/herbicides-and-stubble-some-wash-off-some-dont/]

In another AHRI Insight ‘Pre-emergent herbicides in stubble – Strike or foul?’ https://ahri.uwa.edu.au/pre-emergent-herbicides-in-stubble-strike-or-foul/ we explored the use of this information in a dry sowing situation.