Wheat price rise likely but much drier season ahead: NAB

AUSTRALIAN wheat prices are forecast to increase by the end of 2017, which will come as welcome news to grain growers who have so far seen the benefits of a record harvest tempered by very low prices.

NAB Agribusiness’s ‘In Focus: winter crop harvest update’ forecast Australian wheat prices to increase around 12% by the end of calendar year 2017, although this is based largely on its expectations of a lower AUD.  It forecast the AUD to fall to 70 US cents by the end of year. If this does not occur there is commensurate downside for local wheat prices, the update said.

“We’re not expecting much improvement due to global supply of major crops tracking at near record levels, but a lower AUD would push prices northward,” Mr Ziebell said. 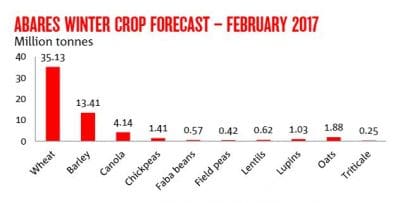 While it’s arguably too early to assess the coming season with any certainty, the Bureau of Meteorology’s models point to the emergence of El Niño in winter this year, which is associated with hotter and drier conditions in eastern and northern Australia.
Mr Ziebell said the wet winter and spring last year that resulted in massive crop yields was consistent with the near La Niña conditions recorded throughout the year.

“This year, unfortunately, the Bureau’s outlook is very different and we seem to have a much drier season ahead of us,” he said.

“2016-17 was an unprecedented crop. ABARES’ latest estimates put the wheat crop at over 35Mt, which is more than 5Mt higher than the previous record set five years ago.”

Source: NAB Link to the NAB Agribusiness In Focus report which includes other crop state commentaries.