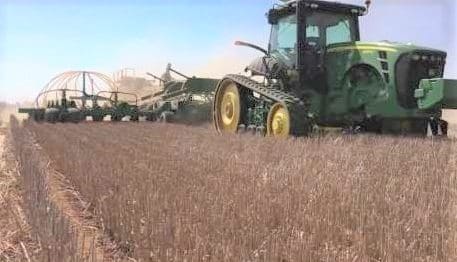 GROWERS in northern New South Wales and southern Queensland are still hopeful of planting a big area of winter crop, but are having to rejig plans to accommodate varieties which suit a June instead of a May planting.

While pockets of winter crop have been sown, consultants say most slopes and plains areas are in desperate need of at least 50 millimetres of rain to enable planting of intended wheat, barley and chickpea area.

AMPS’ agronomist at Moree in north west NSW, Tony Lockrey, said a dry June would see growers wait until the end of the month to decide whether to abandon plans to plant intended winter crop area.

“Early wheat and barley would only be 5-10 per cent of the cereal area, and that’s in, and another 20-30pc has gone in dry, so that means around 40pc of cereals are in now east and west of Moree,” Mr Lockrey said.

He said the past week has seen growers start to falter in terms of how much risk they want to take as short-term forecasts continue to feature little to no rain.

“Growers are looking at varieties that were planted dry that are hitting trouble, like Lancer that would be doing well if it rained three weeks ago.

“If it rains in two weeks, they’d prefer Suntop or Mustang that suits a shorter season.”

Mr Lockrey said dry sowing of cereals has tapered off in the past week or two, and growers with sufficient subsoil moisture were planting chickpeas.

“Grain prices are at historic highs, but chickpea prices are still above the long-term average.”

Mr Lockrey said the northwest plains of NSW had struggled to grow high-yielding summer crops in recent years, and while prices for sorghum were attractive, experience has said that late-planted wheat was likely to yield a better return.

“Faba beans and canola are done for the year and we won’t see any more of them go in, but wheat, barley, chickpeas and linseed will continue as options into July.”

On the Darling Downs of southern Queensland, Pursehouse Rural Pittsworth’s David McNamara said little dry sowing had taken place, and some were planning to fallow until it was time to plant cotton, maize or sorghum in the spring.

“From Cecil Plains to Warwick, there’s not much at all happening at the moment.”

Mr McNamara said most growers needed at least 75 millimetres of rain to get planting.

“Even if we got it this or next week, you’d still want 25-35mm to follow it up and get the crop established.”

Darling Downs growers will plant wheat and barley until mid-June, and into July for chickpeas, but chickpea area is expected to be well down on the past two years because of the reduced price, and the need to go for a cereal at this stage of the rotation.

“The feed price at the moment has gone through the roof. The price for barley and feed wheat for next year is very attractive. It is just that people don’t have the moisture or planting opportunity at the moment to make use of that,” he said.

“When the wheat and barley prices are higher than $350/tonne it is very attractive. But the reasons the price is so high is that no-one has it (the grain) and the prospects are ordinary.

“It is one of those giant ironies. When you see high prices like this, people like to take advantage of the opportunity, but they are just not able to avail themselves of it at the moment.”

“It is one of those giant ironies. When you see high prices like this, people like to take advantage of the opportunity, but they are just not able to…..”

Mr Newton said very little crop had gone in so far and there were growers considering dry sowing on the Downs this year.

“That is very unusual for this area because of the erratic rainfall through the winter compared to southern Australia where dry planting is common practice and they always pick up some rain later,” he said.

On the Liverpool Plains in north west NSW, a swing to sorghum and irrigated cotton is likely if 25-50mm of rain does not fall in coming weeks.

The planting window for canola and forage crops has closed, and a swing into barley is expected if good rain falls soon.

“If it’s not full by June, what do you do? The answer for some might be to hold over more country than they originally intended for sorghum and cotton.

“On the whole, a lot of people are gearing themselves up for more summer crop.”

“Time is ticking, and a larger summer crop is a contingency plan some growers are thinking about.”

Mr McKenzie said 50mm of rain would enable planting of wheat and barley in paddocks with considerable subsoil moisture at depth.

“The moisture we have now is too deep for chickpeas, but if we get 100mm of rain soon, a fair few of them will go in, and if it’s more like 200mm, we’ll get a lot of country go into wheat.”

“We’re still in a mid-season variety window now for cereals, but that’s running out.”

NSW Department of Primary Industries technical specialist (pulses and oilseeds), Don McCaffery, said there had been rain a few weeks ago in the Central West around Cowra, Manildra and Cudal, but it was patchy.

“The rain around Cowra petered out at Parkes. There is basically nothing north of there,” he said.

Mr McCaffery said conditions were slightly better in the southern parts of the state, but anywhere west of the Newell Highway from West Wyalong northwards was doing it tough.

“There is no subsoil moisture anywhere. That is the problem. If people do plant on a 25mm rainfall event they will be living from hand to mouth for the rest of the year. It doesn’t take much of a glitch come August or September to bowl a crop over,” he said.