AS headers work their way through the winter crop harvest, production is set to fall well below the heady heights of last year’s record 59.5-million-tonne (Mt) crop, with the nation expected to produce 35.1Mt this season. 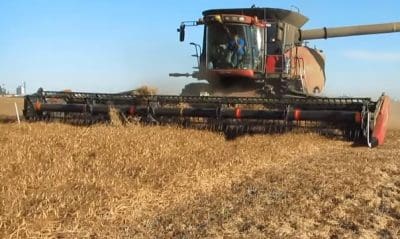 In its ‘Australian Crop Report’ released today, the Australian Bureau of Agricultural and Resource Economics and Sciences’ (ABARES) says prospects for total winter crop production have fallen slightly during spring, due to the varied condition of crops and mixed seasonal conditions.

“The total winter crop production in 2017-18 is forecast to decrease by 41 per cent compared to the previous year, to 35.1Mt,” ABARES executive director, Dr Hatfield-Dodds, said.

“In Victoria and South Australia, regional changes to crop prospects over spring varied but changes to forecast state level production are relatively small.

“While harvest is underway in most regions, progress has been slowed by rainfall throughout November, with December also forecast to bring more inclement weather than average for this time of year.” Dr Hatfield-Dodds said the area planted to summer crops was forecast to rise by 13pc to 1.5 million hectares, reflecting a more favourable opening to the summer crop season for grain sorghum than in 2016–17.

According to the latest three-month rainfall outlook (December to February), issued by the Bureau of Meteorology on 30 November 2017, there is no strong tendency toward either a wetter or drier than average summer in all cropping regions.

Given this, ABARES has assumed average rainfall over summer in the summer cropping regions.

The area planted to grain sorghum is forecast to increase to 636,000 hectares, a 61pc increase on 2016–17 when growers expected higher returns from growing cotton.

Grain sorghum production is forecast to increase by 95pc to around 2Mt.

As at 23 November 2017, the average storage level in public irrigation dams serving cotton-growing regions was around 59pc of capacity. This is significantly below the 73pc on the same date in 2016.

Dryland cotton is forecast to fall by 17pc to 106,000ha because of low levels of soil moisture early in the planting window.

Despite the fall in planted area, cotton production is forecast to increase by 4pc to 968,000 tonnes of cotton lint and 1.4Mt of cottonseed. This largely reflects a forecast increase in irrigated cotton yields.

The area planted to rice is forecast to fall by 2pc in 2017–18 to 80,000ha. Planting conditions have been favourable, and supplies of irrigation water have been sufficient to realise rice planting intentions. Rice production is forecast to decline by 1pc to 800,000t. 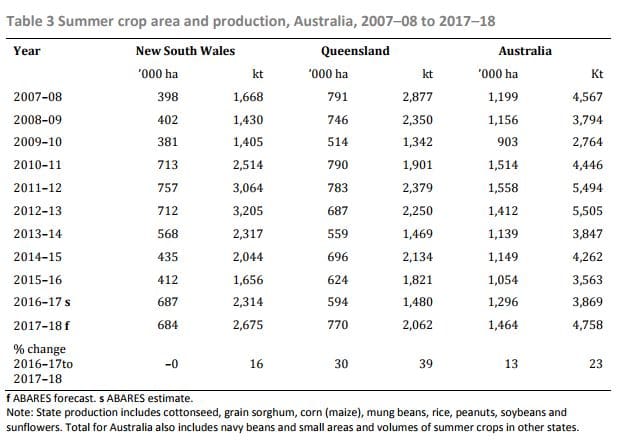 The December edition of the Australian crop report is available at agriculture.gov.au/crop-report-December-2017.