Winter pulses can compete, even without herbicide

CHICKPEAS and faba beans now have a permanent place in most northern region farming rotations and, while they offer some diversity in herbicide options, they have been considered comparatively less competitive against weeds than other crops.

Back when growers had a number of effective herbicide options available, the lower competitiveness of these pulse crops was less problematic because the herbicides were keeping weed numbers low.

In the light of increasing herbicide resistance in many weeds, strong crop competition is required to do more of the ‘heavy lifting’ within an integrated weed management program. 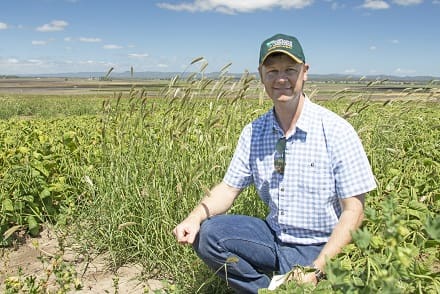 The first round of southern Queensland data was collected for faba bean (PBA Warda) and chickpea (PBA HatTrick) trials harvested in late October 2017, at the Hermitage site near Warwick.

Sowthistle is a major winter weed in pulse crops and growers are finding it is increasingly able to escape herbicide control, robbing the crop of valuable resources while setting huge numbers of seeds that increase weed pressure in the following season.

There are known populations of sowthistle with resistance to glyphosate and chlorsulfuron in the northern grains region (and 2,4-D resistance confirmed in SA), making non-herbicide control tactics all the more important in driving down numbers of this moisture-sucking weed. Faba beans were trialled at narrow and wider row spacing to assess their competitive impact on sowthistle.

“The trials are being replicated at sites near Warwick, Narrabri and Wagga Wagga and will run for five years.”

The faba bean and chickpea crops were trialled at narrow and wider row spacing, and low, medium and high crop densities in both weedy (sown sowthistle) and weed-free plots.

The sowthistle seed sown in the trials all came from the same, non-resistant population and no herbicide was applied to any of the plots.

Dr Widderick said sowthistle was definitely susceptible to crop competition, with even the least competitive faba bean and chickpea crops cutting weed biomass and seed production by at least 50 per cent compared to plots where the weed was allowed to grow free of any crop competition.

“In chickpea we found that reducing row spacing from 50cm to 25cm further reduced weed biomass and seed production by about 50 per cent at a crop density of 40 plants/m2,” he said.

“In this trial, row spacing had no effect on crop yield but increasing plant density did generate a significant and progressive increase in yield for both chickpea and faba bean in weedy plots.” In chickpea, reducing row spacing from 50cm to 25cm cuts sowthistle biomass and seed production by about 50 per cent at a crop density of 40 plants/m2.

When sowthistle is present, increasing crop density from 20 plants/m2 to 70 plants/m2 in faba beans, or to 80 plants/m2 in chickpea, generated around 0.5t/ha yield increase.

Averaged across all treatments for both crops, controlling sowthistle with crop competition alone (no herbicide applied) was worth approximately 0.25t/ha in crop yield.

This research has measured the effect of increasing the competitiveness of chickpeas and faba bean without the use of any herbicide.

On farms, growers usually have some herbicides at their disposal and other research shows that combining effective herbicides with strong crop competition is the best way to control herbicide resistant weeds. 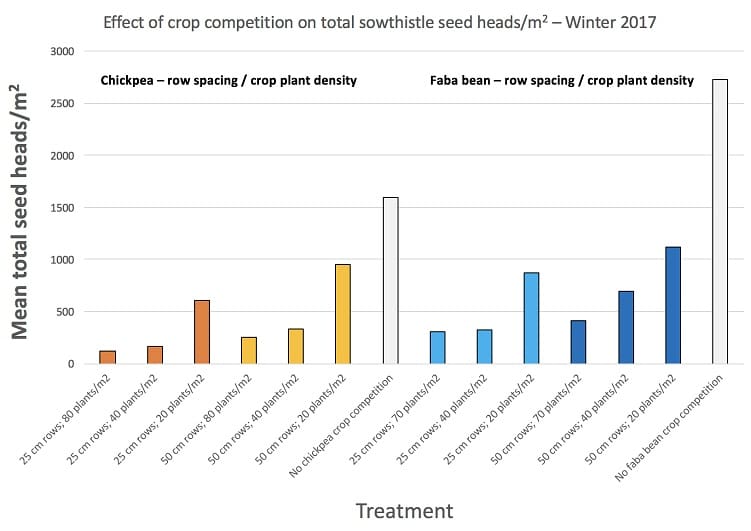