AUSTRALIAN broadacre farmers will be among the first in the world to benefit from ground breaking new grain sorghum herbicide tolerance technology. 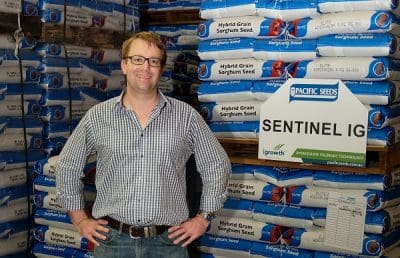 Following five years of development, Pacific Seeds will officially debut its new imidazolinone-tolerant grain sorghum line featuring its proprietary “igrowth” trait at a series of field days across the summer cropping region from the end of January.

The igrowth trait is non-GMO (genetically modified), having been developed using conventional techniques.

Pacific Seeds summer grains and forage business manager, Andrew Short, said what set the trait apart from other attempts to incorporate imidazolinone tolerance into sorghum was its superior crop safety and agronomic performance.

“The igrowth trait offers sorghum growers the most robust form of imidazolinone tolerance in the market. Plant health issues associated with other imi-tolerance mechanisms often resulted in plant yellowing and a narrow window to apply the herbicide,” he said.

“igrowth has proven across years of field trials that when used as directed it offers true imidazolinone tolerance without the risk of crop damage.

“While imidazolinone-tolerant technology has been used in broadacre crops like corn, wheat, barley and canola for some time, this is the first time it will be available in grain sorghum anywhere in the world.”

Mr Short said trial results for the long-awaited technology would be showcased along with weed control benefits and management strategies to optimise crop performance.

“Our Toowoomba-based sorghum breeding team has been instrumental to the development and testing of the world first igrowth herbicide tolerance, working closely with our research and development team in Argentina to ensure commercial reliability and efficacy for the Australian market,” Mr Short said.

igrowth grain sorghum hybrids will be launched in both Australia and Argentina simultaneously, with each geography incorporating the technology into their own locally bred and adapted hybrids.

“With Australia often being such a tough environment, it was vital for us to have this technology in germplasm specifically bred for Australian conditions,” Mr Short said.

“Our comprehensive trials program has included Sentinel IG for a number of seasons now with it demonstrating excellent performance over multiple environments plus offering the added benefit of the igrowth weed control trait.

“As with any herbicide tolerance system however, effective integrated weed management is critical to the success of the crop.

“We hope to work with as many growers and agronomists as possible, as well as the broader industry, to ensure best practice introduction of Sentinel IG while preventing weed resistance development and ensuring this technology continues to benefit Australian farmers for long into the future.”

According to BASF broadacre portfolio manager for Australia and New Zealand Stuart McLaverty, Sentinel IG is the first summer crop on which BASF has conducted crop tolerance screening with Intervix.

“Following the crop tolerance screening, BASF has a high level of confidence in the technology and crop safety fit of the new variety,” Mr McLaverty said.

“Sentinel IG provides another management option for growers to produce a high yield of sorghum and an additional weed management system against weeds such as awnless barnyard grass.

“This project has only helped strengthen the already strong partnership between BASF and Pacific Seeds, paving the way for possible future collaborative efforts.”