IN A world first, researchers from The University of Western Australia (UWA) and The International Centre for Agricultural Research in the Dry Areas (ICARDA) have published a study that will allow chickpea breeders and researches to develop new chickpea varieties with improved adaptation to target environments. 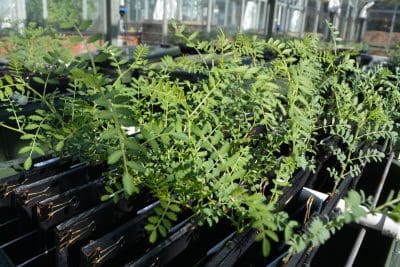 The variability of root architectural traits was characterised across 270 chickpea genotypes including the core collection, providing the basis for breeding new varieties with suitable root traits, to efficiently access soil nutrients and water, and adapt to drought and other stresses.

“Drought stress, particularly at the end of the growing season is a major constraint limiting chickpea production and yield stability in arid and semiarid regions of the world,” he said.

“This study identified deep rooting genotypes which may have the advantage of accessing subsoil reserves of water when the topsoil dries out later in the season in Mediterranean climates such as the southern Australian grainbelt.”

The results highlighted genotype groups that could be crossed to identify the genetic basis of specific root traits, which may help to characterise those traits suitable for targeted genotype selection, and breeding of new chickpea varieties for efficient use of water and nutrients.

United Nations Food and Agricultural Organization’s International Year of Pulses 2016 Special Ambassador and project leader Hackett Professor Kadambot Siddique said the research was ground-breaking because stresses such as drought and low-fertility soils were the main factors restricting the production of chickpea and other major crops in many countries.

“Globally, drought stress reduces chickpea production by an estimated 33 per cent, of which approximately 19pc could be managed through genetic improvement efforts,” Professor Siddique said.

“Chickpea is a highly nutritious pulse crop grown on about 12 million hectares of land from temperate to sub-tropical regions of the world, so this study has the potential to make a huge impact to global food and nutritional security.”

The findings were published in the paper Characterising root trait variability in chickpea (Cicer arietinum L.) germplasm, in Journal of Experimental Botany. The research was supported by the CGIAR Research Program on Grain Legumes in collaboration with The International Centre for Agricultural Research in the Dry Areas (ICARDA).