UNITED States agriculture is doing it tough with US farmers finding it hard to turn a profit in an era of low commodity prices and high costs, despite a system of support well beyond that available to Australian growers. 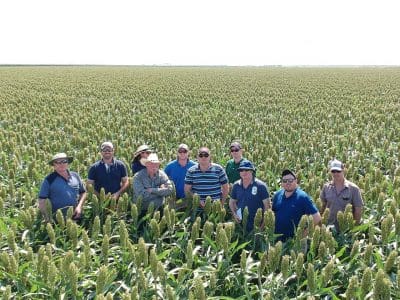 The Australian tour group in a sorghum crop during a visit to Don Kimbrell’s farm near Sunray, North West Texas.

That was one of the telling impressions gained by a small group of young Queensland farmers who recently returned from a tour of four US farming states – Texas, Oklahoma, Kansas and Illinois.

The tour was organised by the Grains Research Foundation, a small Queensland-based research foundation that aims to get young producers out of their corner of the world to see what happens overseas.

Dalby farmer and tour leader, Luke Skerman, said there was no doubt it was a tough time for US farmers at the moment.

“Things aren’t as rosy over there for agriculture as they once were,” he said.

“Their cost of production isn’t being matched by the commodity prices, particularly with corn. They are making some money on soybeans, but corn they are not. One farmer was quoting, with the yields they were expecting this year, around $4.50/bushel to break even. Their current price is about $3.50/bushel.”

Mr Skerman said while the tour group looked at a range of crops including cotton, corn and soybeans, their main focus was on sorghum.

While sorghum yields were comparable to Australia, one difference was that US farmers tended to plant slightly higher populations of sorghum than Australians. 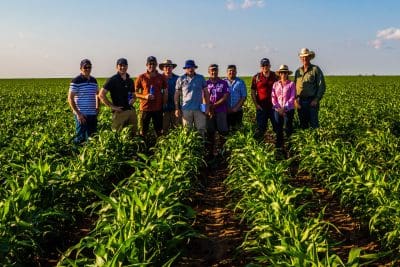 US sorghum growers are battling to control sugar cane aphid which was recently introduced into the US. The tour group is pictured in a sorghum crop during a visit to Mike Hensen’s farm near Lubbock, West Texas.

“They try to stop the plant tillering as much. We pull our rates back and make the plant work harder,” he said.

Mr Skerman said US sorghum growers were battling to control sugar cane aphid which had been introduced into the US recently, most probably on a ship from Africa.

“They are having trouble controlling it. It sucks the life out of the plant and puts a honey dew film over the leaves. If left unchecked, it could knock a crop out,” he said.

“It is not in Australia yet. We don’t want that one.”

Another tour participant, Theodore farmer, Jordan Anderson, said one of the obvious points of difference between farming in the US and Australia was the comprehensive multiperil crop insurance programs that were widely adopted by US farmers and attracted strong government support.

“Crop insurance is heavily subsidised. Up to 80 per cent of the premium is subsidised by the government, depending on where you are and what you are growing. Premiums are very cheap compared to Australia,” he said.

“It is complex, but 95 to 97 per cent of farmers take crop insurance out every year, whereas the numbers in Australia would be nowhere near 10 per cent.

“And you can insure for everything: forward selling and commodity increases, you can claim on the gap; frost; flood; and drought. Basically everything in Australia we can’t claim for is claimable over there.”

Mr Anderson said the US system was weighted to virtually force farmers to take out crop insurance.

“You can’t even get a loan to buy land if you don’t insure your crops. No-one will finance you into land if you haven’t got crop insurance. Even if you want to loan machinery you have to have crop insurance,” he said.

Mr Anderson said another eye-opener was the high level of farm machinery ownership and rapid turnover of equipment by US farmers compared to Australia where many farmers leased machinery or purchased with repayments, and generally held onto machinery longer.

“In the US they buy it outright and roll it over every year. The trade-in is worked out on separator hours on a combine, spray hours on a sprayer or engine hours on a tractor,” he said.

“Regardless of how many hours you do you just trade it in. They do it every year.

“They can’t afford not to trade-in because the next trade-in is going to be double the number of hours. They really can’t afford to skip a year. Once you have new gear you have to keep going with new gear.

“However, because commodity prices are so terrible over there at the moment a lot of guys are choosing to hold onto their gear for the first time in a long time.”

For Miles farmer, Tamara Uebergang, observing the high levels of support that US farmers received in various forms made her realise how self-reliant and efficient Australian farmers were operating in a non-subsidised environment.

“Australian farmers have been forced to be inventive. That is a blessing for us. It has given us resilience,” she said.

Ms Uebergang was concerned by the high levels of herbicide resistance that had developed among a wide range of weeds in US farming systems.

“They have it big time over there. One farmer we met in Texas had just got through Liberty Link cotton. He said he suspected he had Roundup and Dicamba resistant weeds. That sounds alarming.”